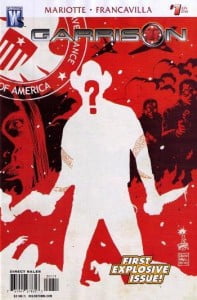 It’s been a long time since I’ve seen a Wildstorm publication with Jeff Mariotte’s name on it. It’s been even longer since he’s written something that was published by Wildstorm. Jeff Mariotte was on several Wildstorm books back during their Image days. I know he’s done other original creations before but I hadn’t read any of them until now.

This issue is a decent set-up for the story. I’d equate it to the first 30-minutes of a film. There is some action, but even that seems to cater to the set-up and introduction of the story more than anything else. Mariotte does a good job of setting up our title character as a man of mystery. His motivations aren’t clear yet but his actions have the authorities after him. So far, there’s not much to know about Garrison the character but that’s part of the story itself. No one knows who this guy is or what to make of what he’s doing.

Francesco Francavilla’s art is good. He obviously knows how to structure a story with his panels and they flow like scenes from a movie. Overall, it’s a decent issue. I’m intrigued, but I’m not hooked yet.