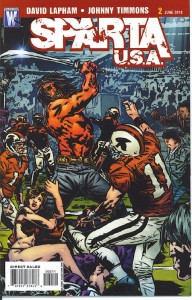 “Fear the Future” (No Spoilers)

Sparta U.S.A. is one of the oddest stories I’ve read in a long while. It’s one-part Twilight Zone, one-part Twin Peaks, with just a dash of Doctor Who thrown in. It’s the kind of story that you spend a lot of time trying to wrap your brain around. So far, I couldn’t tell you if that’s a good thing or a bad thing.

It’s not that the concepts are completely out there. Rising up against an oppressive force seems to be the basis for the story so far. It’s the odd setting and the details of this world that leave you in a constant state of uncertainty. 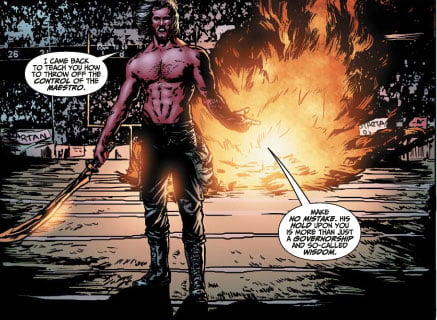 Several things are established in this issue. We finally get to see who has been narrating the last two issues. We get a little info on this world and why Sparta seems to be so segregated from the rest of it. It is solidified that there is a magical element to this world. Plus our protagonist and antagonist are clearly established and their points of view are brought into play.

Writer David Lapham, while leaving me scratching my head most of the time, has crafted a story that seems to feed off our need to know what’s going to happen next. Because even though there is a natural progression of events that happen when dealing with an oppressive force, again it’s this odd little world in which it’s all taking place that doesn’t allow you to predict what’s coming with absolute certainty.

We’re only two issues in but I’d imagine that even when all is said and done, this story will require a second reading to really get all that is being set up here. One thing I will say that’s unique about this is taking supernatural story elements and mixing them up with the mundane. This mix makes for interesting scenes like the cliffhanger of this issue. This cliffhanger could’ve easily been the end of a sitcom or a soap opera. But with all the supernatural elements present, it puts a whole new spin on this situation. Keep leading the way Mr. Lapham, because I have no idea where in the world you’re taking us. But, that’s ok.