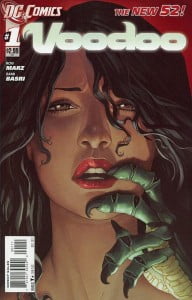 The final round of the New 52 is here and with it comes another addition from the Wildstorm Universe. Voodoo centers on a character that became well-known as a member of the Wildcats during the Wildstorm years. But now Voodoo’s introduction into the DCU comes solo and leaves us wondering where her allegiances really lie. 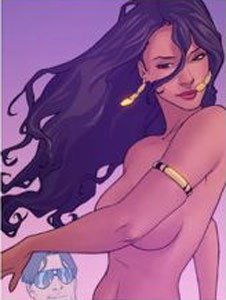 As a member of the Wildcats, Voodoo was always a favorite character of mine. I loved her design and how her later incarnations became less and less superhero and more real world like Wildstorm was known for. This issue alone pays homage to both incarnations of Voodoo. We get to see a variation of her original costume as she dances on stage in this issue which was a nice touch. The character here is full of mystery and her true purpose isn’t clearly defined yet. But it’s this mystery that Ron Marz has presented to us that I hope will have new readers hungry to learn more.

For me, it was fun to see this new interpretation of the character which ended up being a good mixture of new and old ideas. Voodoo displays some powers in this issue that I don’t remember her having before. That was a cool surprise. Focusing on Voodoo alone also gave us more time with the character in the issue so we do get a sense for her. But Marz doesn’t leave us completely without action as we get to see Voodoo in her true form by the end.

There is also the introduction of Agent Fallon who makes a nod to an old Wildstorm team that I hope fans spot. Although, it remains to be seen if this nod is just an homage or if it is yet another inclusion of a Wildstorm team into the DCU. Only future issues will tell.

Sami Basri’s art is incredible! His depictions of Voodoo are appropriately sexy and as Ron Marz stated in our interview with him, it is a sexy book and it’s unapologetic about it. But Marz has promised that we’ll see the reason for this in the series. For now, I say let’s just enjoy the beauty Basri is putting out across these pages. 🙂

I thought it was a solid first issue and I hope newcomers find it easy to follow. Marz keeps the characters to a minimum so you know all their names by the end of the book. I think he also does a good job of establishing what Voodoo can do without spoiling the mystery too soon. I look forward to more from this title and I hope others will give it the chance it deserves.