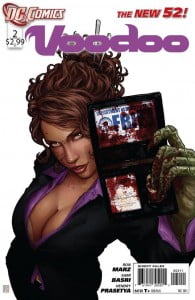 Ron Marz promised this would be a sexy book and that’s just what we got last issue. He also promised that this book would have some action in it and he definitely delivers with that as well in this issue. 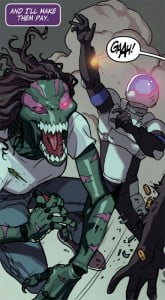 Of all the Wildstorm characters that have showed up in the DCU so far, Voodoo seems to be the one that has changed the most. Marz stated that this incarnation of Voodoo would be a mix of old ideas and new ideas as well. So far, I think he is doing a great job of establishing that this character is pretty different from the one in the pages of Wildcats.

This Voodoo is not afraid to kill and she defends it by saying that it’s to help protect her race. After seeing her true form and how fierce it is, you have to wonder what would threaten her race because it certainly isn’t humans. Her new shape-shifting ability is also used to a very disturbing extent but it lends itself to a very interesting scene that opens up the issue. Marz stated that we don’t know if Voodoo is a hero or a villain. Let’s just say her actions are definitely leaning her toward the latter. 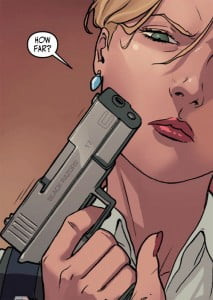 Samri Basri continues to put out some great art on this book, this time assisted by Kendry Prasetya. He also gets to draw another Wildstorm team that is introduced here. It was great to see this team in action again and it confirms a tease Marz put in the first issue. I hope they get to see more action and show the DCU that they are a team to be reckoned with when it comes to dealing with super-powered beings.

If I had any gripes it’s that the issue was over too quickly. But I think it’s similar to the Grifter title where I actually don’t want the issue to end. We also get a nice little tease at the end of another well-established DCU character who will encounter Voodoo next issue. I can’t wait to see it!