This issue has Voodoo turning from her espionage tone and starts transitioning into the realm of sci-fi. This is a bold move for the creative team but thankfully the subject matter lends itself to this type of story without feeling forced.

I am in love with Sami Basri’s art! From the opening pages of this issue he continues to draw a beautiful rendition of Voodoo. On top of that, he gets to draw one of Wildstorm’s most notorious villains. (Minor Spoilers) It was such a pleasant surprise to see Helspont in this issue and Basri captures him perfectly. Seeing him draw Voodoo and Helspont really makes me want Basri on a Wildcats title if they ever launch one. But this brings me back to my one complaint about this series and that’s the covers of the latest issues. The covers are so generic and don’t do justice to what’s in the issues. Helspont should have been on the cover of this issue. DC did well to introduce him in Superman so he should be on the cover of any issue he’s in so they can continue to promote him. 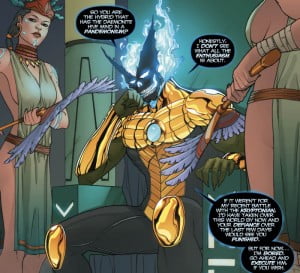 As far as the story goes, it was a solid read. Although, I will say I think Williamson finally slowed down and took a breath in this issue as we don’t have any significant cliffhangers. Thankfully, it’s not like an M. Knight Shyamalan movie where you expect some sort twist. There is a lot of set-up in the issue but it’s done well because I’m really curious to learn more. Williamson continues to expand the influence of the Daemonites in the DCU and I think it’s appropriate that we’re heading into space next. I know DC characters are no strangers when it comes to going into space.

Williamson and Basri also seem to work really well together. There are some great panels juxtaposed with each other throughout the book that really give Voodoo a sense of the split between the clone and the original. Work like this just shows that this creative team has got some great teamwork going on and I think it shows in the quality of this comic right now.

The evolution of this character gets more interesting with each passing issue. I can tell Williamson is having with this title and that his collaboration with Basri is turning out to be very successful. If people would just give this title a try (or return to it), that would make their success complete.