The latest issue of Voodoo takes the book in a new direction (literally) as the setting for the story switches to outer space. The story is interesting and strong art by Basri continue to make it a good title but the recent news of the titles cancellation kind of put a damper on things. 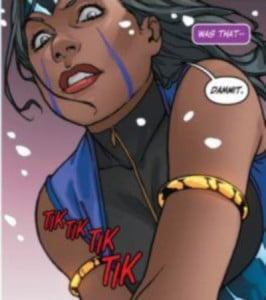 It was hard to read this issue without having in the back of my mind that we only have 3 issues left (including the zero issue). I knew this title was in trouble and that cancellation was looming, but it still doesn’t make it any easier to take. All along, as much as I love Voodoo, I’m not sure she should’ve had her own title. She’s always seemed to work better in a team setting. Despite the creative team change, the title’s days are numbered.

I wonder if by this point Williamson knew this because these last two issues haven’t been as strong as his premiere issues. He was hitting us with wild revelations and leaving us with crazy cliffhangers early on. But the last couple of issues kind of seem like he’s just going through the motions of the story. It’s kind of how Nathan Edmondson’s writing seemed to shift when he found out he was leaving the title. Obviously it would take Williamson himself to confirm this, but it’s just an observation. 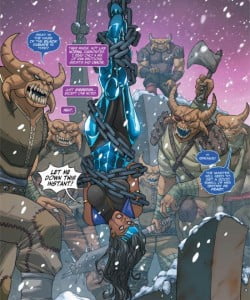 We do get some interesting revelations about the Daemonite culture which has been a theme between this and Grifter’s title lately. It’s cool to see the new mythos surrounding the DCU Daemonites growing. It’s ideas we’ll have to wait and see if they carry on after the title is gone.

Basri’s art is still the one constant in this title. I’m curious to see where they’ll place him after the title is done. He’s a great talent and I’d hate to see him not used after this. I could never think of which artist Basri’s art reminded but of until I realized it’s very reminiscent of the Luna Brothers over at Image. It’s got a real clean, almost animated tone to it and I have enjoyed every minute of it.

I hope the adventure on Europa turns out to be memorable at least. It’s never fun to be enjoying a book only to know that the issues will end soon. All we can do is see what Williamson has up his sleeve for the character as they get ready to turn out the lights.