“Forgive Us Our Synge”

After taking a sharp 180 with the new creative team a couple of issues back, the Grifter title has been a mixed bag. However, much like last issue’s surprise revelation, Tieri and Liefeld are starting to interject some interesting twists that are reminiscent of what Josh Williamson did when he came on Voodoo’s book. Hopefully, these twists will be enough to get people drawn back to this book. 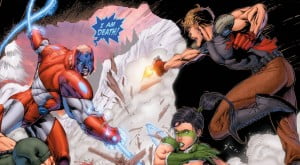 I’ll admit the last couple of issues of Grifter haven’t exactly been my favorite. But since then I’ve had to take the perspective that this is like a new book and instead of issue 11, this is more like issue 3 of a new series. This version of Grifter is more like he was in the old Wildstorm U and as long as I keep that in mind, I can enjoy the series more.

First off, it was a nice surprise to see Marat Mychaels drawing this issue. He’s one of Liefeld’s regulars and he normally pencils Liefeld’s creations or will assist with any projects Liefeld’s working on. I actually met him at Wizard World-Austin in 2010. He’s a really nice guy and I do like his art. Since he’s from the early days of Image, much like Scott Clark, Mychaels art takes me back. He’s also good at doing action which we learned from writer Frank Tieri last month that this was one of DC’s mandates for the title. In that, the title is certainly not lacking.

But my one concern about that mandate is it doesn’t leave Liefeld and Tieri enough time let us get to know Grifter. It’s funny because Grifter even comments that “Lately, life’s been a friggin’ whirlwind.” I don’t think he could’ve summed up the title better. In getting the creators to focus on action, they are meeting a classic aspect of the character but there’s so much more that can be done. That said, I do appreciate a nice twist the writers throw in at the end but again, because they’re made to focus on action so much, a twist is all they have room for. After talking with Tieri it just makes me wish editorial would leave writers alone because I’d be curious to see what they could do without all these mandates thrown at them.

Next issue is set to be interesting as we have another appearance by Helspont promised in the solicits. Like I’ve said before, I support this title even if I don’t agree with everything that’s being done in it. I just want this character to be successful in the New 52 and between this title and the upcoming Team 7 title, I’m glad he’s getting a lot of exposure.