” The Enemy of my Enemy is not my Friend”

The countdown continues as we near the end of this series. The story is leading to the inevitable confrontation but the surprises and big revelations of the earlier issues are non-existence. Ultimately, the one factor left that’s the most interesting is how will the issue of two Voodoo’s existing in the DCU be solved? 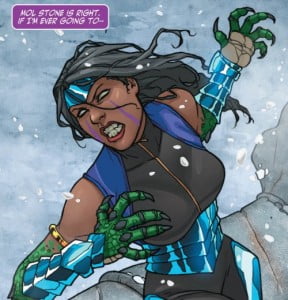 I’ve mentioned this about the previous couple of issues but it bears repeating here because it’s still true. This title just seems to be going through he motions here at the end. I think Williamson spoiled us with all the surprises and revelations early on and we’ve come to expect it now. However, as I’ve stated before I can’t help shake the feeling that the change in tone for the book is due to Williamson learning the book was going to be cancelled. Regardless, let me pull some things from this title that I still enjoy.

Despite all the changes, Sami Basri as artist has been the one consistently good thing about this book. I noticed that he’s listed as the new artist for Supergirl come October. Thank God DC recognized his talent and didn’t let him fall by the way side. I’m also glad that they put him on another title with a female lead because he’s great at drawing beautiful women. I’ve always loved his rendition of Voodoo and little things like his facial expressions still capture the characters in the book perfectly. 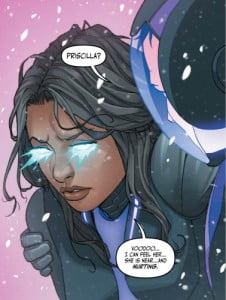 We’ve seen that Voodoo is being graphed into Grifter’s title after her own is done. This is not only exciting because we get to see more of her, but also because she’s reuniting with one of her old Wildstorm crew. After some hints Rob Liefeld dropped at San Diego Comic Con this year about a possible Wildcats title, I’m hoping that this is another step DC has laid out to get to that goal.

The Voodoo title is not as strong as it once was but maybe that speaks to why it’s being cancelled. She’s a great character and I’m glad DC is not abandoning her. Hopefully the next issue will prove to be a great confrontation and afterward the zero issue will answer lots of questions about the character.