One question we’re always asked is “If I want to get into Wildstorm, where do I start?”  I’m going to list below the Wildstorm series that, in my personal opinion, are worth checking out.  You can also choose where to start by reading the list below and simply picking a spot that sounds good.  As with any universe, it would be ideal to start at the beginning but the Wildstorm Universe has several key runs that you can enjoy without going all the way back to the beginning.  (If you’d like to know which trades to follow the integration of the WSU into the DCU New 52, check those out here.) Or if you’re looking for info about Warren Ellis’ The Wild Storm then click here.  If you are looking for our Reading/Checklist click here.
– Joe

Ok, I guess we’ll start at the beginning as they say. The older Image stuff will probably be the easiest to find in discount bins. 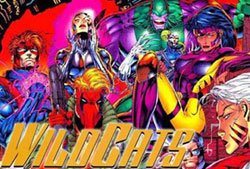 WildC.A.T.s: Covert Action Teams (1992-1998)
It’s not everyone’s favorite but it’s one of mine. It shows the team come together and introduces Majestic (known as Mr. Majestic then) and the villain Tapestry. Plus it has all that pretty Jim Lee art. 😉 (Collected in trades:  WildC.A.T.s: Compendium, WildC.A.T.s/Cyberforce: Killer Instinct, WildC.A.T.s: A Gathering of Eagles) There was also an Absolute WildC.A.T.s released (pictured below) 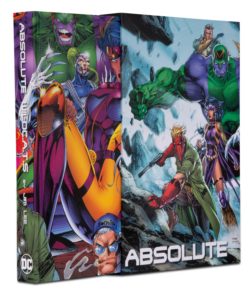 A fun little run by James Robinson and Travis Charest that I feel is overlooked because of Alan Moore’s run that follows. (Collected in trade; James Robinson’s Complete WildC.A.T.s)

#21-34 (Alan Moore’s run)
This is the first critical point in Wildcats history because it’s the story that began to give the team an identity of its own instead of being considered “X-men rip-offs”. Also introduces the villain Tao who is later important to Ed Brubaker’s “Sleeper” and later in World’s End. It’s also noteworthy that Alan Moore did a story in #50 that features the death of one of the characters he introduced in his run. 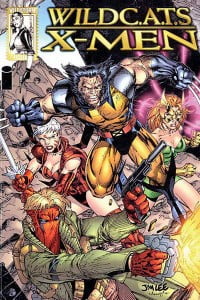 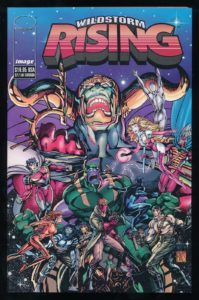 Wildstorm Rising was the company’s first crossover that ran thought all their books.

#1-28 This run starts with Scott Lobdell and Travis Charest and it’s pretty cool then, but it really kicks into high gear when Joe Casey and Sean Phillips take over with #8 until the end. (Collected in trades Wildcats-Vol. 1: Street Smart, Wildcats-Vol. 2: Vicious Circles, Wildcats-Vol. 3: Serial Boxes, Wildcats-Vol. 4:Battery Park) 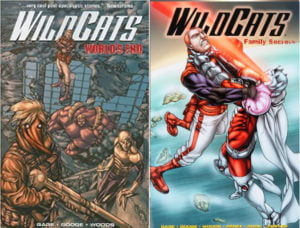 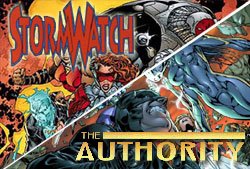 #37-50 (Warren Ellis’ run) This is where the seeds were planted for The Authority. Ellis does a good job of getting you up to speed on the characters. (Volume 1 Collected in Stormwatch Volume 1 – Hardcover 2012, Stormwatch-Book 1: Forces of Nature, Stormwatch-Book 2: Lightning Strikes, Stormwatch-Book 3: Change or Die) 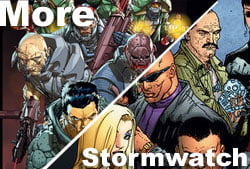 This is where Stormwatch went astray. Jackson King and Christine put together an odd-ball team with the intention of still “making a finer world” but in his own forced way. We even have some old Wildstorm characters as regulars on the team, can you believe Union?!?!

23 issue series. This one takes place just before, during, and shortly after Coup d’etat. It’s the non-superhuman answer to teams like The Authority. Interesting thing about this series is it was canceled one issue before the finale because writer Micah Ian Wright was fired for lying about being in the military. (Collected in trades Stormwatch: Team Achilles Vol. 1 & Vol. 2, unfortunately rest of series is currently not collected)

This team kind of filled the void left by Team Achilles and is a great “superhero cop-drama” for the first 12 issues written by Christos Gage. At #13 it picks up the World’s End storyline. (Collected in trades Stormwatch: P.H.D. Vol. 1, Vol. 2,)

I personally think you can take or leave this series. It basically shows the team with Jenny Quantum growing up along side their adventures. (Collected in trades The Authority: Harsh Realities, The Authority: Fractured Worlds)

This is the Grant Morrison/Gene Ha series that got put on hold after the first 2 issues in 2006. But Keith Giffen took over writing it in 2009 and it has been re-titled “The Authority: The Lost Year”. This series is just ok as a whole. It’s a 12-issue mini that shows what The Authority was doing before World’s End. (Collected in The Authority: Lost Year-Book 1, Book 2 was cancelled) 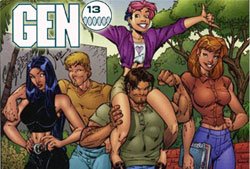 Gen 13
There are two ways you can go with Gen 13. You can check out some of the earlier stuff or you can skip ahead and start with Gail Simone’s Vol. 4. She wrote it in such a way as to re-introduce the characters. So it’s your choice.

Gen 13-Vol. 1
Original 5 issue mini-series that introduces the kids. (Collected in either trade, Gen 13: Collected Edition or Gen 13: Who They Are and How They Came to Be) 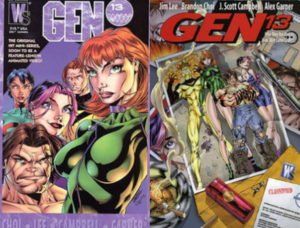 #60-71 (Adam Warren run) Most of the Gen 13 series isn’t that great, but if you like Manga inspired-stuff, Warren’s run is for you and it actually ends the series. (Collected in trades Gen 13: Superhuman Like You & Gen 13: Meanwhile)

Gen 13-Vol.3
You can pretty much disregard this series.  But, if you insist…This only trade released contains #0-6 of the 16 issues released.  (Gen 13: September Song) 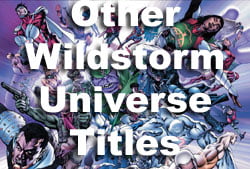 A fun series that does have ties to the WSU but can also be read as a stand-alone. Max Faraday does have importance in World’s End as well. 12 issue mini with the one-shots Divine Intervention: Wildcats and Divine Intervention: Gen 13 fitting between issue 11 & 12. (Collected in trades Divine Right-Book 1 & Book 2)

Original 4 issue Team 7 mini-series is the best and it establishes a lot of characters who later become prominent in the WSU. (Collected in Team 7 trade).

While simultaneously writing Gen 13, Gail Simone introduced the town of to the WSU (retroactively). Can be enjoyed without knowing too much about the WSU because it focuses on new characters. (Collected in Welcome to Tranquility Vol. 1 & Vol. 2 and there is a follow-up mini-series called Welcome to Tranquility: One Foot in the Grave.)

Wildstorm: After the Fall

The Wildstorm: After the Fall trade that collects the back-up stories that ran through the 1st year of World’s End titles (read concurrently with the 1st 4 World’s End trades).

And then the Armageddon Trilogy that leads to World’s End (all traded): I know it’s a lot so feel free to ask questions if you got them. 🙂