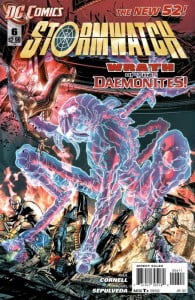 Well, Paul Cornell’s run on Stormwatch ends with a bang…literally. I can’t say much without spoiling so let’s just say the team isn’t the only thing falling apart in this issue. Cornell leaves us with some cool moments but also leaves us with many more questions that hopefully future creative teams will pick up. 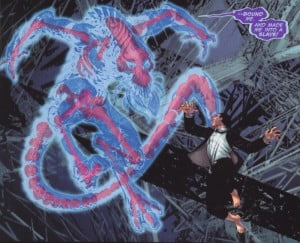 Thanks to the cover of this issue, it’s no spoiler to say that the team encounters a Daemonite in the issue. This is the beginning of several titles this month that will show the Daemonite infestation and how it begins to grow in the DCU. I’m glad the Daemonites are being introduced as a legitimate threat into the DCU. There’s even a quick note on the first page of this issue letting readers know to check out Superman #7 for more (which the solicits already show Superman fighting the Daemonite leader, Helspont). But the reason Cornell comes up with for the Daemonite to be on the station is absolutely brilliant. I thought it was such a cool idea and it’s using the Daemonites in a way we havne’t seen yet. So, bravo to Cornell for evolving the Daemonite thread even more.

We also get more of Apollo and Midnighter and I’m really enjoying how their story is unfolding. There are similarities to the Apollo and Midnighter of the old WSU but there’s something different about these two versions. I think I’m liking these two more because they’re starting in a different place then when they were characters of The Authority. I actually didn’t like The Authority when it first came out. It wasn’t until much later on that I came to like the characters. Here, I feel that their motivations are different so I think that’s why I like these versions better. I look forward to finding about more about them. 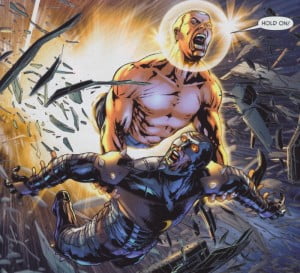 Sepulveda’s art continues to improve and we get some great shots in this issue. I applaud Sepulveda for being the latest artist to nail the new look for the Daemonites. I think he’s also gotten a lot more comfortable drawing the characters too. I’m glad we’re getting more from him on this title in the coming months.

Finally, I love that Cornell left some things unresolved so the next creative teams could handle them. Cornell set up so much that it would’ve felt rushed to try and wrap it all up here. It was recently announced that Peter Milligan will be taking over with #9 after Paul Jenkin’s two-issue run on 7 and 8. So it’ll be interesting to see how the three writers bridge everything together. I’m still enjoying this title a lot and I’m eagerly anticipating where we will go next with this team.