Grifter’s zero issue turns out to be a major mind-screw and Liefeld and Tieri play with our senses, making the audience question what’s real and what’s not. It’s a very interesting technique and a bold choice for the zero issue. It’s not as epic as the last issue, but definitely sets up a ton of questions that carry us into the next arc for this series. 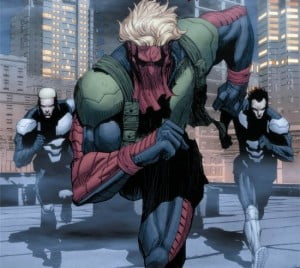 I’m willing to bet Liefeld and Tieri have both seen Christopher Nolan’s film, Memento because that’s what immediately came to mind with the issue. (If you’ve never seen it, go watch it now!) Much like that movie messes with the viewers perception, so does this issue. When I saw it started out in the past with appearances by Grifter’s brother Max and fellow Team 7 member, John Lynch, I was ready for a nice “early adventures” story. But no, Liefeld and Tieri were not satisfied with that. And maybe after our complaints of the simplicity of their early issues, I think it was a good choice. By the end of the issue I’m just as confused as Grifter is in story, but in this case, that’s a good thing. I just hope that the rewrites Liefeld mentioned during his departure from DC don’t affect what’s set up here too much.

If any of you are checking out the newly re-launched Valiant Universe, another book this reminded me of is Bloodshot. The origins here (won’t spoil anything) are VERY similar. I’m actually ok with that because I like both characters but it’s interesting that the most recent issue, Bloodshot #2 was so similar to Grifter #0. Both characters are really having their mind messed with. And on top of that, this issue establishes that instead of there being two opposing sides pulling to use Grifter as their weapon, there are actually three! When Liefeld and Tieri wrote Grifter as being The Chosen One, they weren’t kidding. Everyone seems to want Grifter on their side! 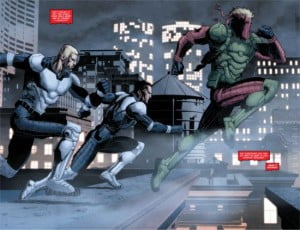 The introduction of the new character Warwick is interesting. He seems to have potential and I hope Tieri (now on the book without Liefeld) will take some chances while doing the classic student/mentor story. If I had any complaints about the issue it’s that it felt too short. The flip side of that is I think it felt short because we get some awesome full-pages of art from Scott Clark. So it wasn’t all bad.

Well, issue 12 was epic, this issue was perplexing but interesting, so I’m seeing a positive trend with this title now. Plus, we get Voodoo joining the title next month so it’ll be cool to see two former Wildcats team members interacting again. Things are looking up for Grifter!