Peter Milligan starts steering the team in a new direction as the long-awaited plans of former-Stormwatch member Harry Tanner finally come to the forefront. It causes Midnighter becomes a fugitive and shows us the killing-machine himself having no choice but to flee for his life. It’s a bold move for a team whose current incarnation hasn’t existed that long in the New 52 and it makes for an exciting issue. 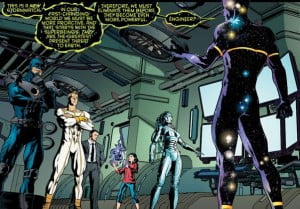 Artist Will Conrad promised that Midnighter would be having a hard time in the coming months. This issue (along with future solicits) show that he wasn’t kidding. The seeds of Harry Tanner’s manipulations have been planted for over a year now in this book and it’s cool to finally see them coming to fruition. His plans also seem to be laying groundwork for next year’s Trinity War crossover as well but how heavily the Stormwatch title will play into that remains to be seen.

Fans of Midnighter and Apollo, both new and old, will to see some hard times for the couple in this issue. It’s been interesting seeing these two get together but that all gets threatened here. It’s this kind of drama that makes this more enjoyable than a straight-up action book. I’m actually liking how these characters interact. Even Jenny Quantum and Apollo get a nice scene together which is something I don’t think we’ve seen yet in the series. 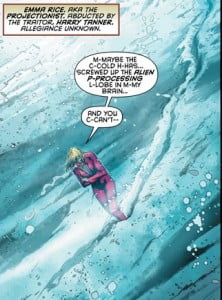 Again we get an art split between Will Conrad & Cliff Richards. I don’t’ know if Richards is doing better at matching up with Conrad’s style but it didn’t seem as jarring visually here as it had in the past. I still prefer Conrad but I can say overall I’m still pretty happy with the art in this book.

The creative team is really shaking up this title. The solicits show that things are going to get worse for the team. What’s really going to be interesting is to see where the team stands when the dust settles. Since the zero issue, I feel like this title has gotten new life. I hope others are realizing that as well and jumping on board.