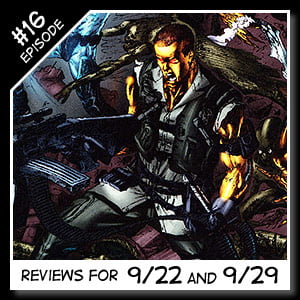 Show Notes:
Welcome to another awesome episode of Wildstorm Addiction! Joe David Soliz and Ben Murphy bring you Wildstorm reviews for the weeks of September 22nd and 29th 2010. Reviews including Garrison #6 (of 6), Wildcats #27, and Wetworks: Mutations (One-shot).

00:00:46 – Spoiler alerts warning, but all the written Wildstorm reviews at site are spoiler free unless otherwise noted.

00:06:03 – Joe tries to review Garrison #6 but we both get sidetracked with the Jeff Mariotte Gen 13 novels that no one has ever read, but hey you can get them cheap on ebay!

00:08:55 – Joe for real this time reviews Garrison #6 (of 6) written by Jeff Mariotte, with art and cover by Francesco Francavilla.

00:13:26 – Ben catches you up on Wildcats #27 orchestrated by Adam Beechen, with art by Tim Seeley and Andy Smith, along with cover art by Chris Sprouse & Karl Story.

00:23:32 – Joe lays down his thoughts on Wildcats #27 and it’s rush to the end trying not to let the news tarnish this awesome title.

00:30:02 – Joe reviews Wetworks: Mutations written by Kevin Grevioux and Christopher Long, art by Julius Gopez, and cover by Brandon Badeaux. Bare with Joe for almost five minutes here as he gives you a great rundown on Wetworks history from beginning to end from his point of view.

00:51:52 – Joe gives you are contact info which you will find below and says good night.