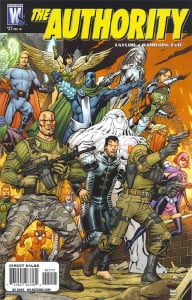 The Authority really got back on track with this issue story-wise. Where I felt the last issue went by way too fast, I liked the pattern this one laid out. It did a good job of juggling the two groups of the heroes and kept the story moving along nicely. 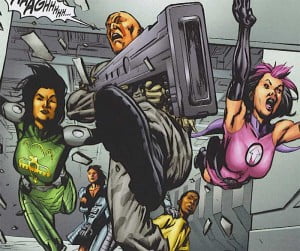 I won’t spoil it but I will say we finally get the origin of The Carrier this issue. It’s an interesting concept but ultimately I wasn’t blow away by the revelation like I was hoping I was. I think it was mainly because the explanation surrounding the alien race was something I’ve heard in other stories. If it weren’t for that, I think I would’ve appreciated the origin story more. Don’t misunderstand me, it’s not a bad origin at all. It’s just something I’ve seen before countless times in science fiction.

But like I stated earlier, I did enjoy the pacing of the issue a lot more this time. If I had any quips about the issue it’s a gag they do with River where he gets a full page that I just thought was ok. I know it was supposed to be funny but it felt a little forced. Other than that, I loved the interaction with the characters and I’ve still enjoying Al Barrionuevo’s art.

I will give Tom Taylor credit for a very intriguing cliffhanger. As with the other WSU titles, as we begin the countdown to December I hope a lot of these plotlines get resolved. I’m anxious to see how this all concludes.