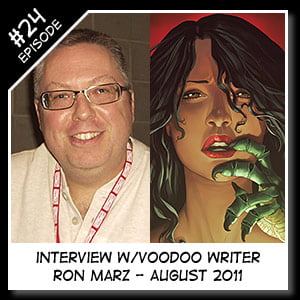 00:00:35  – Ben welcomes everyone to Episode #24 and introduces our special guest for the evening, Ron Marz, writer of Voodoo.

Note: It wouldn’t be an interview podcast without technical difficulties. This time our interviewee is on a standard telephone which is a first for us, so the quality may not be the best. However Joe was having major internet slow downs so he may pop in and out of certain conversations. You’ll have to excuse his loudness at times.

00:01:22 – [WA – Joe] You have done some great things for the industry(the famous Emerald Twilight story which introduced Kyle Rayner, CrossGen, the revitalization of the Top Cow Universe, just to name a few), but where did it all begin? How did you get your start in the industry?
00:01:41 – [Ron] I was kinda led by the hand by Jim Starlin who was in the industry long before I began writing. We just happened to live in the same area and ended up at the same parties. I had been working as a sports writer, but he suggested the idea of writing comics to put food on the table. He threw me into the deep end of the pool by giving me Silver Surfer as my first monthly assignment.

00:02:38 – [WA – Ben] Because you’ve been in the business so long, many people look towards you as their influence. But who/what are some of your influences as a writer?
00:02:48 – [Ron] As far as comics goes Starlin is right up there since he sorta gave me a crash course into comics. It’s certainly a learned skill and there is a lack of visual writing in comics these days for the artist. Jim definitely showed me the ropes on comics. Alan Moore and Frank Miller in the 80s. Beyond that Stephen King, Charles Dickens, Robert E. Howard, Tolkien. In my youth I read more novels than I did comics. A lot of my background comes from prose.

00:04:50 – [WA – Ben] What made you decide to take on Voodoo?  Is she a favorite character? I know you’ve worked in the Wildstorm Universe in the past so I’m wondering what stood out in order for you to take on Voodoo. After talking to Jim Lee at last year’s New York Comic Con he promised that Wildstorm would be back in some form, and it seems as though he may be protecting some of his favorite characters that he created. So that’s why we want to know why you chose to take on Voodoo.
00:05:27 – [Ron] It’s pretty simple, I got a call on a Friday afternoon and was told that we have this book do I want to write it. It’s pretty well know that I was one of the later writers brought into the whole relaunch. I like that it’s a character that doesn’t have any pre-existing baggage in terms of having to stick to any previous continuity. Just the fact in being involved in the DC relaunch. I think it’s a bold step forward for what we’re doing as an industry. Non-hardcore readers are going to be affected by the fact that these books are available the same day digitally as they are on the stands. Being a part of this move is really exciting for me. So all of that played a factor into it. And the other aspect was, Sami Basri who I had worked with on some Witchblade issues. I’m a fan of his and was excited to work with him again. What he’s doing now, I’m stunned about. The level of work that he’s doing now is spectacular.

00:09:19 – [WA – Ben] I have a follow-up to the pricing for the relaunch. Is the idea on the retail side that DC will do poly bagged editions with the digital codes and the newsstand editions living side-by-side on the local shelves forever or just for the launch?
00:10:02 – [Ron]  I have no idea, I’m not plugged into that side of it, I think it’s mostly just the Justice League launch. I certainly understand the brick and mortar retailers being upset. DC is really going out of its way to include the local shops in the relaunch and its business plan going forward. It’s a really interesting time in the business because we’re on the cusp of deciding where that delivery mechanism goes. I don’t think anyone has the answer, but I think it’s obvious that the digital aspect is going to have an increasingly large aspect of how people get their comics. I admire DC for striking out on this path and trying to bring readers back into the fold through the digital outreach. And I also admire them for not just kicking the retailers to the curb. I think it’s an important step for comics to be a little less of a niche entertainment medium and a little bit more mass media. The honest truth is we don’t know where this is going to go. It’s exciting and it’s scary at the same time.

00:16:47 – [WA – Joe] How much collaboration did you have as far as designs and story elements with Sami Basri? Over in Stormwatch, Apollo and Midnighter got some very noticeable redesigns. From what little we’ve seen of Voodoo she doesn’t seem to be redesigned very much. Can you discuss why that is?
00:17:24 – [Ron] Sami Basri is in Indonesia, he’s literally on the other side of the world for me. But frankly more and more that’s the situation because of the leaps in technology. You are working with guys on the other side of the world that may not even speak the same language. It’s weird some of my best friends are on the other side of the world that I never really see. It’s a different way of working than comics have never really been done. I’m not in contact with Sami every day. The level of collaboration really depends on how that particular partnership works best. In terms of Voodoo’s design, we aren’t really approaching Voodoo as a superhero. So we aren’t really approaching her design as such. Some of the promo artwork they chose show that she’s at stripper, or at least we think that she is. That’s something that was a part of her previous incarnation and very much a part of the background character in Wildcats. That was an aspect that I wanted to keep, at least for a while, in the book. Working as an exotic dancer aspect might not be what everyone thinks it is. There’s a reason for it that’s part of the story which will be revealed as we go. I think the book is unapologetically sexy within the bounds of a teen rated book.

00:22:11 – [WA – Ben] That’s something that Joe and I were wondering. There is a concern amongst Wildstorm fans that the WSU characters will be watered-down for the DCU integration. Since Voodoo is a stripper we were wondering how it’s going to fit, so thanks for shedding some light on it.
00:22:46  – [WA – Ron]  I don’t want to give too much away but this is an espionage book in a lot of ways, Voodoo is the spy, she’s an espionage agent. We don’t know who she is working for initially.  It’s not exactly the same character that appeared in the Wildstorm Universe. There will be some aspects to her that will be new. Voodoo is naturally seen as an outsider as far as the readership goes. And I wanted to use that as part of the story as a point of view character as we explore what the DCU is now.

00:30:31 – [WA – Ben] Are there any Wildstorm characters that we will be seeing coming into these books or are there any Wildstorm characters that you’d love to write into them?
00:30:51 – [Ron] Some things that have appeared in Wildstorm books will be in the Voodoo books. As we move forward there are some other characters I’d like to bring in here and there, but not at the expense of showing DCU characters as well. One of the cool things is having that mix and how it all shakes out. She will be a character that grows and evolves over the first year.

00:32:25 – [WA – Joe] There are some people out there who are very excited about the book, but there are some who are not. What would you say to them to get them to give this book a try?
00:33:44 – [Ron] Do you mean there are cynical fans on the internet? I am shocked! I think we are doing really damn good book, in fact I know we are doing a damn good book! I have a pretty good self-critical eye. This is absolutely an edge book. There are things in issue one and two that I didn’t think we’d be able to do. The sexy stuff is sexy and the violent stuff is violent, we aren’t soft pedaling this stuff.

00:40:21 – [WA – Ben] We usually wrap this up with a loaded fun question. Voodoo has always been a magically and spiritually driven character so Voodoo vs. Zatanna: Who wins and why?
00:40:51 – [Ron] Voodoo. Why would I pick the character I don’t write?

00:42:02 -Joe gives an update on Wildstorm character appearances in the DCU Flashpoint mini-series leading up to the DCU relaunch.

00:44:10 – After Ben gives the contact info Joe has “one, more, thing” to discuss. He suggests that if you’d like to discuss the new Wildstorm integration into the DCU that you check out Wildstorm Superfan Chris Striker’s message board from the Higher Authority website, Clark’s Bar: http://theauthority.ws/clarksbar/

The opening music is “Universal Domain” by Dreamline which can be found athttp://www.musicalley.com.