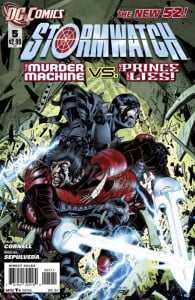 Wow! What an amazing issue! I thought Cornell had wrapped up the previous conflict last issue a little too quickly but now I know why he did. This issue had exactly what I wanted: good character moments, great action, and an amazing cliffhanger. 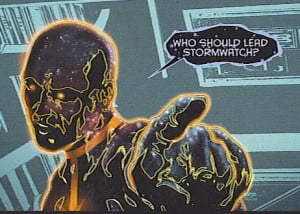 One of the things people have mentioned about the first few issues of this title is how fast-paced it was. Some people liked it while others didn’t. It didn’t bother me as much because I already knew half these characters so there wasn’t much for me to learn. But I can see how a new reader might get lost in so many characters. Cornell does a good job of slowing things down enough at the beginning of the issue to give a nice in-story recap of the characters and their powers. He also throws in tidbits of information about some of the characters that hadn’t been previously shared. This was a nice way to get readers up to speed if they were a little lost before.

There are also some great characters moments between Midnighter and Apollo. Cornell mentioned that he would be exploring the beginnings of their romance and I like how he’s setting it up here. It’s making the pairing more believable by taking time to set everything up instead of jumping right in and making these two a couple. 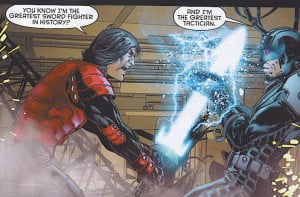 The cover of the issue carries the statement, “The Murder Machine vs. The Prince of Lies” and we see Midnighter and Harry Tanner the Eminence of Blades fighting. Miguel Sepulveda’s art has really gotten stronger and it really shines during the fight between the two. I not only love the outcome of the fight, but the amazing cliffhanger that it leads to. It’s also great to see editorial stepping in and promoting the other books that will see this story continue as it mentions picking up next month’s Stormwatch #6, Superman #6, and March’s Grifter #7. It just shows the interconnectivity of the new DCU 52 and utilizes it well.

I am bummed that next issue will be Cornell’s last but he is going to be followed up by good company as Paul Jenkins takes over with issue 7. But with the way Cornell ended this issue, Jenkins should be happy if there’s even a team left to write about when the dust settles!