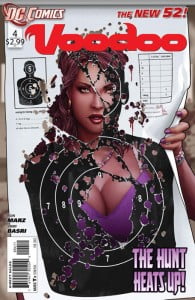 We come to the final issue of Ron Marz on Voodoo and it is truly bitter sweet as the story that Marz was setting up won’t ever be truly realized. There are some hints to Voodoo’s origins and some set up for some future stories but how much of this will be retained by the new writer remains to be seen. 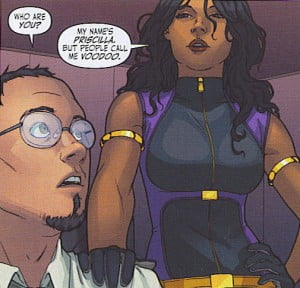 The first thing that’s interesting is that Voodoo gets a costume of sorts in this issue. It’s basically a stealth suit that she wears while infiltrating a government facility but it has her trademark purple and yellow color scheme. I had a conversation with a friend about this the other day and he told me he didn’t think the designs for the Wildstorm characters matched the other DCU character redesigns. If next month’s cover to #5 is any indication, Voodoo will have a costume that’s more in line with the other characters. For me the design is fine because it’s understated but still stays true to the character.

Sam Basri’s art continues to be strong and I have to assume her costume design is his doing. He’s got some great action scenes that are juxtaposed with the characters of Agent Fallon and Blackjack discussing what they know about Voodoo so far. This is always a fun storytelling device because it allows for exposition and action at the same time. 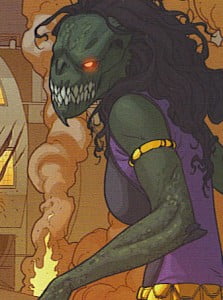 The connectivity of the new DCU is still very evident here as we see Voodoo gathering information on Earth’s superhero population and naturally she’s starts with the most well known hero: Superman. It’s also cool to see a picture of the Justice League on the screen later as well (which is basically the cover to issue 5). I’m so glad the editorial staff is working hard to keep all this making sense.

As sad as I am to see Marz leave, a recent interview with upcoming writer Josh Williamson really has me curious to see what he’ll have in store for this title. He seemed very enthusiastic about coming aboard I look forward to what he has in store for this character.