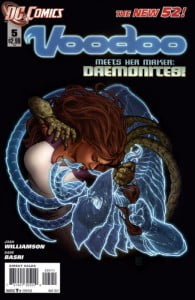 Wow! New writer Josh Williamson not only starts his run off with a bang but he ends with a great W.T.F. cliffhanger that’s one of the best I’ve seen in a while. If this first issue is any indication of what Williamson has in store, I’m super excited about this title again. 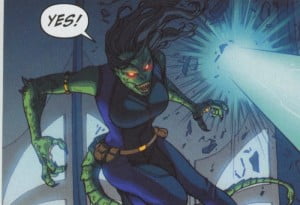 The first four issues of this title offered a lot of set-up and it was hard to see where we were going with the title. I’ve always liked the character of Voodoo so unlike many others, I’ve been willing to wait for the pay-off. I think Williamson did an excellent job of taking the things Ron Marz set up and giving us a good conclusion but ended up opening up a whole new realm of possibilities. There are some great hints here as to the Daemonites motivations and why they want to take over Earth. I also liked how the Daemontie was portrayed. He and Voodoo were pretty evenly matched in the fight and it makes me appreciate Grifter more because he’s had to deal with more than one Daemonite. 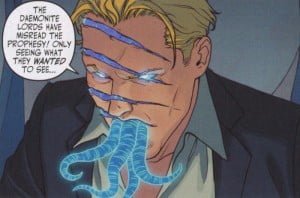 I am glad that they kept Sami Basri on the title. According to the solicits he’s not going anywhere any time soon and I’m glad. I never get tired of seeing his rendition of Voodoo. His facial expressions are still dead on and he keeps the layouts unique enough to keep it interesting. Without spoiling anything I will say that he gets to draw one of my favorite characters in this issue, even if it is a cameo (of sorts). I applaud any artist who can keep up with the design of these new Daemonites. In Grifter’s title we saw artists CAFU and Scott Clark take on the task. So far between those two artist and Basri, they’ve got the look of the Daemonites consistent. 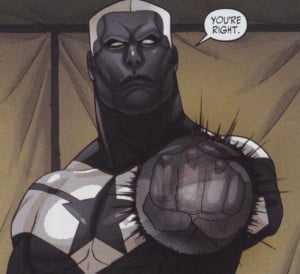 One last aspect of this title I feel I’ve neglected to comment on in the past are John Tyler Christopher’s covers. He’s done them since issue 2 and they’re beautiful each time. He always comes up with some great concepts for the covers. I’ve loved each of them but next to the Green Lantern cover he did for issue 3, I think this one is my favorite. The Yin Yang motif he’s got going on with Voodoo and the Daemonite is so simple yet so brilliant as it speaks to the conflict Voodoo is experiencing in the story. I’d love to see Christopher do some interior work.

Overall, I think it was a great first issue for Josh Williamson. I hope people give this title a chance with the new writer. It seems that Williamson is going to breathe some new life into this book and it’s obvious by the issue cliffhanger that he’s not afraid to take chances with the book. If you’ve dropped the book, at least pick this issue up and see if the cliffhanger intrigues you enough to pick up the book again.