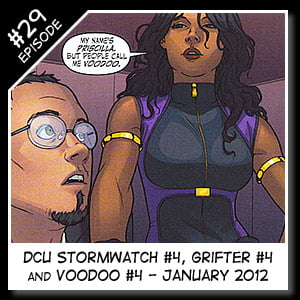 Show Notes:
Welcome to another episode of Wildstorm Addiction! Our resident Wildstorm experts Joe David Soliz & Benjamin Murphy review the new DCU versions of Stormwatch #4, Voodoo #4 and Grifter #4 as well as some other Wildstorm appearances in the new DCU 52.

00:00:33  – Joe welcomes everyone to episode #29 and gives his spoiler alerts warning. Remember, all written reviews on the website are spoiler free and usually get posted within a day of print release.

00:01:37  – Joe gives some Wildstorm related news as it pertains to the current books in the DCU.

00:04:28 – Before jumping into the first review Ben looks back on 2011 for a bit. Last year we were recording what we thought was going to be our farewell podcast. Lo and behold, Wildstorm has come back into our lives for the relaunch of the new DCU 52. And it’s been great for old and new fans of Wildstorm characters alike. We are both looking forward to what treasures 2012 has for us as more WSU characters may appear in upcoming titles.

00:05:38 – Ben reviews Stormwatch #4. Released released on 12/07, written by Paul Cornell with art and cover by Miguel Sepulveda. Ben’s not sure he can give this title the review it deserves like Joe did last month, but he tries his best.

00:18:30 – Joe follows up on his thoughts for the fourth issue of Stormwatch.

00:23:42 – Joe reviews Grifter #4. Released on 12/14, written by Nathan Edmondson, with art by Scott Clark and cover by CAFU. Joe loves the nostalgic feel that Scott Clark has given this title with the infusion of his art for Grifter.

00:37:32 – Ben reviews the fourth issue of the mysterious and sexy alien Voodoo. Released on 12/28, written by Ron Marz with art by Sami Basri and cover by John Tyler Christopher. This is sadly Ron Marz’s final issue writing Voodoo.

00:51:30 – Joe sums up his thoughts on Voodoo, how Marz has setup the character for it’s take over by a new writer Josh Williamson.

00:56:52 – Joe gives an update on other Wildstorm related sighting and tie-ins from the other DCU 52 issue #4’s that have released last month.

01:04:38 -Ben continues by giving a run-down on the upcoming books and character appearances in the new DCU relaunch. Remember, all these books are available digitally the same day as the print release at the DC section of www.comixology.com

01:06:24 – Joe gives a shout out to Chris Striker, of the Higher Authority and Stormwatch.ws websites. Remember to visit The Higher Authority’s message boards Clark’s Bar to continue the Wildstorm integration discussions amongst long time Wildstorm fans at theauthority.ws. DC Wormhole podcast ep. 3 is out at culturalwormhole.com and they’re covering several of the new 52 books.