Josh Williamson keeps the roller coaster ride going as he feeds off the shocking revelation at the end of last issue. Not only do we get a great mix of action and intrigue in this issue, but we also get some great crossover information between this title and the Stormwatch and Grifter titles. Williamson is showing that he’s got more up his sleeve where Voodoo’s concerned.

The direction Williamson choose to take was definitely a big surprise. There were many who were concerned about his choice of plot device but I think it’s the shot in the arm this series needed. Ron Marz did a lot of great set-up in the series but I think fans were getting a little restless. Now, it’s a matter of finding out the truth behind this twist and seeing where Williamson will take it from here. I will say that he does some great nods to Marz’s issues. 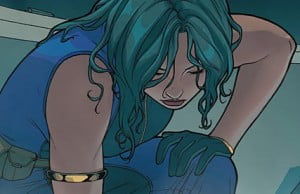 Sami Basri’s art continues to be great. If I had a nitpick it’s the design of the Black Razor armor Agent Fallon wears. I’m fine with the different colored helms for the Black Razors but I just couldn’t get into the design Basri chose for her. Now like I said, this is a nitpick because I love his art.  His depiction of Voodoo’s confrontation with the Daemonties towards the end is awesome! He also does a great job of giving one character who just recently appeared in Grifter #6 a nice little cameo too. Which brings me to another positive about the Wildstorm-character books in general. 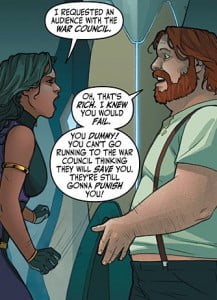 February was toted as the month where Stormwatch, Grifer, Voodoo and even Superman would be running stories centered on the Daemonties. So far I have loved how they’ve set it up. The crossover is not shoved in your face in each issue, rather the events just seem to feed into one another. This was an interesting way to take the books because so far, none of the characters have actually crossed-over. But what happens in each of their books is relevant to the others. I’ve enjoyed this style of storytelling for this crossover.

Ultimately, I think this title has a strong pulse again. If you dropped this book you have got to come back and give it a try. Williamson’s doing a great job of ramping up the action and the mystery here and if he keeps this pace up, things can only get better from here.