We trade one Paul in for another as new writer Paul Jenkins takes over the reigns from Paul Cornell.  Jenkins is set to do a short two-issue story but he quickly shows us that he’s going to make the most of this little stint.  Mix that in with some great art by guest artist Ignacio Calero and you’ve got another solid issue of this great series! 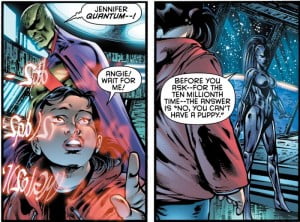 People joked that the end of Cornell’s run portrayed Stormwatch as an amalgamation of The Authority and Planetary.  I think that sense continues here as we open to a very Planetary-esque situation.  However, once back on the Stormwatch’s headquarters, there’s a sense that we’re reading the pages of The Authority again (only with Martian Manhunter in the mix this time).  This is definitely not a bad thing as the characters just seem to play off one another as they always have.

I have to mention Ignacio Calero’s art.  I have been enjoying Miguel Sepulveda’s art on this title but I have to say I enjoyed Calero’s art just a tad bit more.  I loved the little touches he added like giving The Engineer a ponytail made of wires or the distinct look he gave Martian Manhunter.  I’m not sure where he’s headed after this short run but I hope DC uses him elsewhere in their books. 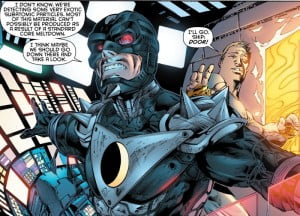 One thing Jenkins nailed right away is what I think makes this title interesting as a whole.  He kept the high-concept ideas in place and it gives the sci-fi aspect of the book more weight.  The training that Martian Manhunter is taking Jenny through is way out there but I love it!  I also love the use of Jack’s powers too.  In a  previous issue we saw him communicate with two of the DCU’s most famous cities.  Now we get to see him communicate with three well known cities, but these are from the real world.  The scene between Jack and these three cities is so well done and really tugs at your heartstrings a little.

I wasn’t sure what Jenkins was going to do with only two issues but so far with just this one he has crafted a great story!  It’s sad that he’s only going to get two issues but if next issue is anywhere close to this, it’s going to be some great stuff!