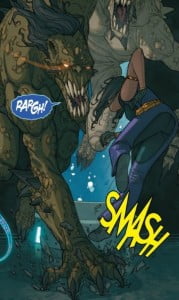 Williamson brings us another action packed issue with even more surprises in a story aptly titled “Revelations”. The fast pace coupled with beautiful art by Sami Basri leaves me wondering why more people aren’t coming back to this title. Here’s to hoping that buzz about the positive changes in the title will get more readers to come back who left early on.

I’m going to start this review a little backwards and talk about the end first. Williamson loves cliffhangers, he’s made that evident from his first issue. This one is no different. His revelation about Voodoo really makes for an interesting story here. She started the series as a character of mystery but now with that mystery mostly solved, it brings up a ton of questions. Williamson has answered some here but presented a dozen more and that is what is becoming the strength of this title.

He’s also established that characters aren’t safe in this story. We’ve got the death of a character at the end of the issue and it’s done in such a way that I hope it sticks. It’s nothing against the character themselves but it really took the story in a much darker direction. There are some who speculated that the reason Williamson went with the clone story is because the DCU version of Voodoo seemed to kill too easily. Now, DC can’t have one of their heroes kill, right? Well, whether or not Voodoo is a hero has been in question since the beginning. Her character is more like that of an insurgent trying to topple a rival government. So rather than try to explain away her motives, it seems that they’re basically showing us she was never the “real” Voodoo to begin with. It’s just a theory but as we progress it seems more and more likely that this is the case. 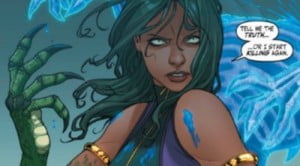 Williamson also does some interesting character work here. When Voodoo’s clone attacks the Daemonites, she’s countered by some creatures the Daemonites send after her. I won’t spoil it by revealing what they are but there’s actually a sad moment with them that brought up an interesting conflict for the character. It’s little touches like this that are making me enjoy this story more now than before.

I think Williamson has turned this title around and breathed new life into it. If you are not reading Voodoo anymore, pick up Willimason’s issues and see what you think. I personally am having a lot of fun with them. Oh, and Basri’s art is still amazing! 🙂