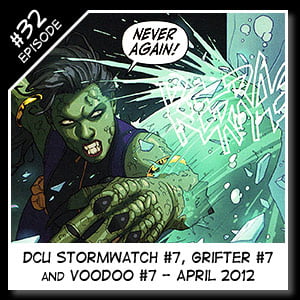 Show Notes:
Welcome to another episode of Wildstorm Addiction! Our resident Wildstorm experts Joe David Soliz & Benjamin Murphy review the new DCU versions of Stormwatch #7, Voodoo #7 and Grifter #7 as well as some other Wildstorm appearances in the new DCU 52.

00:00:35  – Ben welcomes everyone to episode #32 and gives his spoiler alerts warning. Remember, all written reviews on the website are spoiler free and usually get posted within a day of print release.

00:01:02 – Ben gives some Wildstorm related news as it pertains to the current books in the DCU.

00:22:11 – Ben shares his thoughts for the seventh issue of Stormwatch. A long review by Joe, but man it was worth it. A humbling Jack Hawksmoor scene makes this issue top notch. And the tight two issue story telling makes you feel like you’ve gotten a lot out of the read.

00:36:00 – Joe reviews the seventh issue of Voodoo with change in creative. Released on 3/28, written by Josh Williamson with art by Sami Basri and cover by Paulo Siqueira.

00:51:20 – Ben shares his thoughts on Voodoo especially with the new direction that writer Josh Williamson is taking this title.

00:57:23 – Ben gives an update on other Wildstorm related sighting and tie-ins from the other DCU 52 issue #7’s that have released this past month.

01:00:49 -Joe continues by giving a run-down on the upcoming books and character appearances in the new DCU relaunch. Remember, all these books are available digitally the same day as the print release at the DC section of www.comixology.com.

01:04:02 – We discuss a little bit about the new DC Comics logo and website upgrade. No more message boards!?!? I assume they are just going to rely on twitter, facebook, and google+ from here on out. Join us on Clark’s Bar! Ben gives a shout out to Chris Striker, of the Higher Authority and Stormwatch.ws websites. Remember to visit The Higher Authority’s message boards Clark’s Bar to continue the Wildstorm integration discussions amongst long time Wildstorm fans at theauthority.ws. DC Wormhole podcast episode 8 is out at culturalwormhole.com and they’re covering several of the new 52 books.