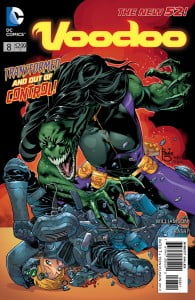 Josh Williamson keeps the craziness coming as we get another action packed issue with new revelations, new characters joining in, and old characters biting the dust. Mix this with Sami Basri’s exceptional art and you’ve got one of the most under-appreciated titles of the New 52. 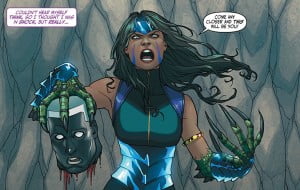 I’d love to see Williamson’s notes and see which characters he has listed for termination because we’ve lost two in the last two issues (I realize the ‘death’ from this issue is still questionable but still). It’s no wonder Williamson has chosen to import Andrew Lincoln of the Blackhawks into this title. At this rate, there may not be any other characters left besides new ones. This has made for some great story-telling because suddenly no one is safe in this title. This increases the threat level for the characters and makes it more real. It’s nothing against the current characters, it just keeps you on edge. 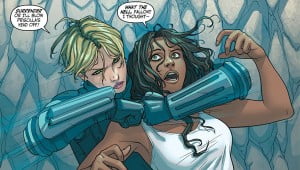 I hope DC appreciates Sami Basri. He’s one of the few artists that has made it to the 8th issue of these New 52 titles without missing an issue. On top of that, at no point has his art felt rushes. Not only that, I think his art has actually improved from the early issues as he seems to have gotten comfortable with these characters. I’m not sure if he’s listed for issue 9 but he’s back for 10 and 11. Regardless, if he’s gone next issue, it’s a well deserved break because he has been extremely reliable on this title.

I thought I wasn’t going to like the fact that there are two Voodoos now but it’s actually turning out to be pretty interesting. I’m more accepting of the original Voodoo now that I know she was a clone. I know these are not the same characters from the Wildstorm Universe but I feel like everyone else still kept the spirit of the old characters. I didn’t feel that way about Voodoo until the clone revelation. Voodoo always had a dark side to her but how dark depended on who was writing her at the time.

The first trade for this can’t come out fast enough (listed for Oct. I believe). I know some people are trade-waiting this title but I just hope it can survive until then. For now, I’ll just continue to enjoy the craziness Williamson is throwing at us each month. And trust me, when Williamson has throw his stories at us before, it hits you right in the face!