Peter Milligan comes on as writer this month and he brings with him some baddies he’s familiar with as he pits Stormwatch against the Red Lantern, Skallox! Series regular artist Miguel Sepulveda also returns and his time off seems to have stepped up his A-game for this new direction for the title. 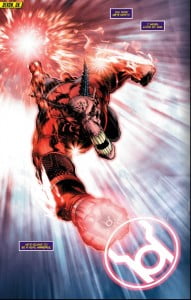 Stormwatch as a title seems to always attract good writers. Ever since Warren Ellis had his hands in this title back in the day, each incarnation of the team has always been unique and interesting. Even though there are many elements of The Authority here, each of the three writers that have handled this title so far have given the team its own flavor so it’s not exactly an Authority title in disguise. It is subtle, I’ll admit, but it’s still there.

With the origin of the team already told by Paul Cornell and a short adventure courtesy of Paul Jenkins last couple of issues, the team is in a “business as usual” mode as they’re hopping the globe dealing with various threats. But Milligan reminds us that this latest incarnation of the team is still in its infancy as we have team members questioning The Engineer’s leadership and Midnighter questioning whether or not he should be part of this team at all. These kind of conflicts are nice to see because it makes for a more interesting read. It’s a more realistic approach than expecting a group of strangers to get along just because they have superpowers. 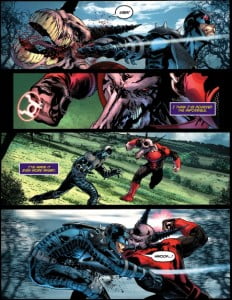 I also like that Milligan brought in a Red Lantern. It’s smart not only because he’s been writing the Red Lantern title but it also continues the inter-connectivity of the New 52. It’s always cool to see characters from different books interacting. Plus, it was done in a such a way I didn’t feel this Red Lantern was forced into the title.

I have to say Miguel Sepulveda’s art is at its best. I had to double-check that he was still the artist as I read. I enjoyed his early art but it wasn’t my favorite. I think he’s gotten really comfortable with this title and it seems he’s starting to feel free to take some artistic liberties. This was evident in a scene where Apollo drops Midnighter into a field and Sepulveda does a motion-shot which shows Midnighter doing a hand-stand, performing a flip, and finally landing. It’s the little details like this that separate good art from great art.

Milligan is off to a strong start in a story that seems deceivingly self-contained. I feel he’s setting up some great stuff here and I for one am hooked with this new writer. Stormwatch continues to be one of the stronger titles of the New 52.