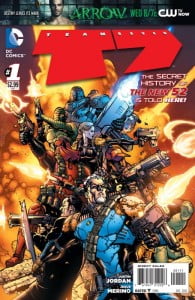 Team 7’s introduction to the DCU continues here as we get an action-filled issue that puts the team to the test. While the zero issue had to mix action with introductions with action, here writer Justin Jordan had the freedom to go more action. But he adds a narrative that re-introduces the characters through the eyes of Lynch for those who didn’t read the zero issue. 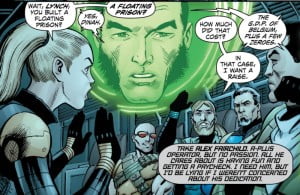 Jordan took a chance by making this issue accessible even though he had the zero issue under his belt. Issue zero set-up how the team got together but here we see them on their first mission. Jordan uses their leader Lynch to provide a narrative that re-introduces the team members as he gives his post-mission report. I understand why Jordan did it but for those of us who did read the zero issue, I felt it got in the way of the story a bit. It’s a double-edged sword because this is a first issue after all and this stuff needs to be there. The good news is, it stands well on its own without the zero issue.

I’m still not keen on Jesus Merino’s art. It’s just too old school for me. He is not a bad artist, he just has a really simple style. I will say though, I do like that his rendition of Grifter goes for the white-out eyes instead of the visible eyes through the mask. I know it’s a nit-pick but white eyes always look cooler for masks (just look at the Bat Family). I was also hoping that Grifter’s armor would look be colored like it was in his own zero issue. But looks like it’s mainly red-based for now.

Another thing that threw me off is the solicitation mentioned the team as headed to Gamorra. Now for those who don’t know, Gamorra was an island ruled by dictator Kaizen Gamorra who ended up being one of the greatest Wildstorm villains. So I was surprised to see that the team ended up in another location and it remains to be seen if Gamorra will come into play in the next issue.

While a decent follow-up issue to the zero issue, I was expecting a little more. We’ve got a good set-up here and we’ve got the conflicts amongst the team members established. I’m just looking for something that’s really going to grab me with this title. Here’s to hoping Jordan’s got something hidden up his sleeve.