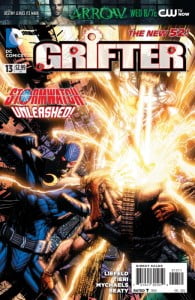 “Eye of the Storm”

Grifter resumes its regular numbering after Zero Month minus Rob Liefeld and Scott Clark. But we have Liefeld’s dialogue writer, Frank Tieri, stepping in as well as Marat Mychaels coming on with art. But Liefeld’s influence still lingers as we get some odd story choices in a slightly confusing issue.

I will start off by saying I think between issue zero and this issue it’s actually a decent starting off point. It would be obvious to a new reader that there is plenty of stuff that has come before, but I think issue zero set up the origin of Grifter and his new mentor Warick well enough to where you get why they’re in the middle of this mission. That said, the story does take some confusing turns. Without spoiling anything, it’s mainly about the logic of Grifter entering Stormwatch’s base once and then seemly doing it a second time, although it seems the second time was an accident.

Then we get a confrontation between him and Apollo which is immediately followed by another confrontation with Midnighter. I understand the reasoning behind the outcome and being a Grifter fan you’d think I wouldn’t been happy with the outcome, but also being a Stormwatch fan, I found myself questioning if it really would’ve gone down this way. There’s also a scene with Grifter and Voodoo that, while I admit is something that’s never been explored before, I’m not sure how I feel about the idea yet. 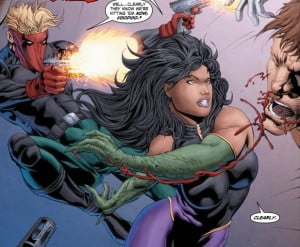 Marat Mychaels did an earlier issue of Grifter and even though he had a few slight missteps in the art, I will re-iterate that I love his rendition of Grifter. The look Mychaels gives Grifter is very reminiscent of his classic Image look but more stream-lined. He does good action but much like Liefeld, he doesn’t seem to do a lot of backgrounds. Which is cool sometimes but can get a little distracting after a while.

I have to say I didn’t enjoy the issue as much as #12 and #0 but I think it’s better with Liefeld gone. Tieri informed me on Twitter that issue 15 he did solo so I really look forward to seeing what he does without Liefeld’s influence still lingering. I know this title is in danger of being cancelled so if that’s true, let’s hope these last few issues take us out with a bang!