Team 7 is in the house! This title gets stronger and stronger with each new issue. Julius Gopez on art has been much more enjoyable these last couple of issues. Jordan also throws in a little Indiana Jones/ G.I. Joe flavor with this issue that really gives the team a chance to shine. I feel this title is finally getting its footing. Toting itself as the history of the New 52 is a big job but I feel it’s one Jordan is handling really well. 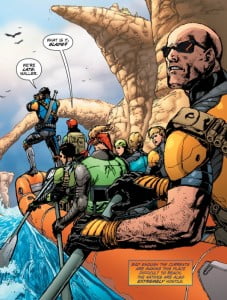 Let’s start off by bringing to light the fact that Jordan does three key cool things in this issue that I really appreciated. We get a cameo by Essence from Red Hood and the Outlaws (no spoilers, she’s mentioned in the solicit), we get the New 52 introduction of Eclipso (also mentioned in the solicits) and finally we get the New 52 introduction of one of the greatest Wildstorm villains ever (not mentioned in solicits so you’ll just have to find out who for yourself)! Add on top of that the fact that Deathstroke takes a turn at narrating the issue (Lynch and Black Canary narrated the previous two) and we get a really solid issue.

I also have to say that Julius Gopez’s art was much stronger here than last issue but it looks like we have different inker for him this time. Jimbo Salgado is the inker and he makes Gopez’s art look more like it did on Gopez’s last Wildstorm project which was the Wetworks: Mutations one-shot. This is how I remember Gopez’s art and is a further testament to how important the choice of inker is for an artist. Gopez did some amazing work here. He was not listed in the solicits for this issue so I’m hoping that even though he’s not listed in next month’s issue, he’ll still be drawing it. 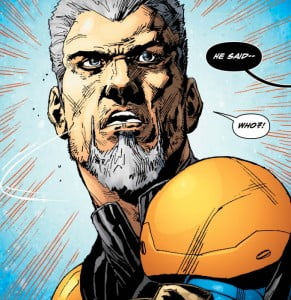 This title is finally starting to come into its own. I’m hoping most people who may have gotten a little discouraged with this title early on will come back and give this issue a try. Jordan has been giving us a nice build to this issue and it’s starting to pay off. I’m also glad that he’s the new spearhead for inserting Wildstorm characters into the New 52 as the solicits show we’re getting several coming down the line. Oh, and with Grifter’s own title ending soon, I’m glad he’s still got a presence here. The explanation of why he wears his mask was funny because it was so matter of fact.