Well, the crazy ride that has been the Grifter title comes to an end. After many ups and downs writer Frank Tieri is pinned with the near-impossible task of making it all make sense. Thankfully, he was afforded one last issue to do so and I think he did decent job considering everything. 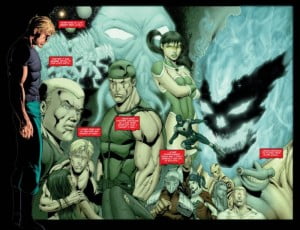 This series is like a beautiful vase that started with lots of potential but along the way was smashed on the floor, glued back together, smashed again, and glued together once again. You can site multiple sources for this title’s failure but I’m going to focus on what we actually got instead of what we could’ve gotten (since I feel that’s been discussed to death). Tieri took all the different ideas about Grifter’s origins and brings it all back full circle so he can at least give us an ending of sorts. When a title is cancelled, it’s always nice when editorial gives the creative team enough lead time to craft an ending. 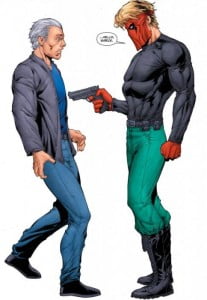 The ending finally does answer the question as to what Grifter is and shows his true purpose against the Daemonites. It still makes sense with what came before and for that alone I applaud Tieri. Grifter has been dragged through the mud in-story and in the real world. His decision at the end of the issue is appropriate, all things considered. But they also leave it open for more stories that could either be addressed in Team 7 or the rumored Wildcats title that may be coming next year.

There’s not too much more to say about this title at this point. As I said before, we could easily debate all day long about what caused the series demise. But, what’s done is done. I’m happy that Grifter still exists over in Team 7 so at least he won’t be absent from the DCU (unlike poor Voodoo who has since disappeared).

Overall, definitely more frustrated about this cancellation than I was with Voodoo. Grifter has been and will always be a cool character (as well as my favorite, next to Batman). But as with any other character, if he’s not done right, he cannot have success as a comic. Grifter’s in the hands of Justin Jordan now over in Team 7. Here’s to hoping he’ll get better treatment there.