“Betrayal-Part 2: The Hunt for Midnighter “

The saga of Harry Tanner vs. Stormwatch comes to a head this issue. It’s a storyline that’s been building since Paul Cornell’s original run. But the build-up may have hurt the story in the end. Even the twist at the end with one of the characters (which was kind of ruined by the solicits) isn’t enough pay-off. But despite these things, still another decent issue of Stormwatch. 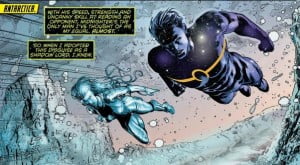 I’m going to start off by focusing on something I think has been extremely consistent in the last few months which is Will Conrad’s art. I love his rendition of the characters and he’s gotten to draw some awesome scenes during his run. However, due to time constraints I would imagine, he’s had fill-in artists help him finish each issue. Now the fill-in artists have not been bad at all. Here we have Eduardo Pansica and Julio Ferreira. If we must have fill-in artists, I’m glad they got some that match Conrad’s style. I think Conrad is one of the best artists DC has right now and I’m glad to see he’s going to be doing Stormwatch for a while.

Now, concerning the story. This is the climax of the Harry Tanner vs. Stormwatch storyline which has been in the background of the title since Cornell’s run ended at issue 6. I have been thoroughly enjoying it because I have enjoyed Harry as a villain. Some complained that he fooled Stormwatch too easily but I argued that by the nature of his powers, he would be able to fool everyone except Midnighter. And that’s exactly what happened. However, because it’s been built-up for so long, the ironic thing is I felt it was wrapped up too fast. I wanted to see more of Harry manipulating Stormwatch but it’s obvious they wanted to move on to the twist. 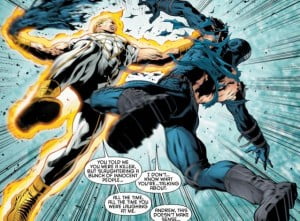 Now, the change in one of the characters that creates the twist for the issue is not far-fetched because it’s feeding off of something Milligan planted at the beginning of his run. My disappointment is that this development was spoiled by solicits of future issues. So it kind of killed the surprise. That aside, while most people will not like where this character is going, I have to admit it’s an interesting twist. I just hope it’ll play out well.

Stormwatch is still a solid title and I’m hoping for the best, but I can’t help but worry with the declining monthly sales. I can easily see how this book could morph into The Authority title just like it did in the old Wildstorm Universe, but I’m not sure if that’s what DC intends to do. Regardless, I hope they keep these characters going because with the Voodoo and Grifter titles gone, it’s the only original New 52 launch title pulled from Wildstorm that’s left. Here’s to hoping!