Wow! Justin Jordan has really hit his stride with this title. He wraps up the first arc in grand style as we get an action packed thrill ride for the introduction of Eclipso into the New 52. Even Jesus Merino seemed to be on his A-game. This title is like G.I. Joe with superpowers and so far and it’s been great! 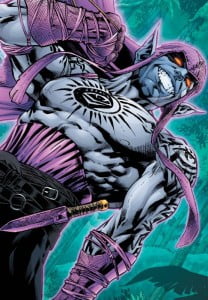 I’ll start with Jesus Merino’s art. I wasn’t too crazy about it in the opening issues of the series. But here it just seemed so much better. He hasn’t drawn the last couple of issues so I think all he needed was that extra time. You can tell even with his opening shot of Eclipso which I swear for a second reminded me of Brett Booth’s version of the character. Although to keep in line with the rest of the New 52, this seems to be a younger version of Eclipso.

And I love the way Justin Jordan writes Grifter! THIS is the Grifter I wanted in his solo series! Everything Grifter did in this issue is exactly how’d I’d picture him reacting to the situation. As much as I hated that Grifter’s solo series got cancelled, I am thankful that not only is the character still active in this book, he’s also in the hands of the an awesome writer. Thank you Justin for redeeming one of my favorite characters! 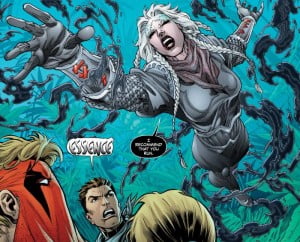 This really is a great issue all the way around. At first I was perplexed by the choice to add the character Essence to this story but as it unfolded I could see why they chose her. I also liked how the team finally came together and showed why John Lynch had faith in this group. Speaking of Lynch, there are ties to the Justice League Black Room (not a spoiler, it’s in the solicits), as well as the beginnings of Slade turning into Deathstroke, and finally we get a tease about something called the Majestic Project. Old Wildstorm fans will know why that’s relevant and we’ll see if Jordan takes that idea in the direction we’re all hoping.

This title has not just found its footing…now it’s sprinting! It was kind of a shaky start coming out of Zero Month and the constant change in artists, but for those who’ve held on, I hope you enjoyed the outcome as much as I did. And if you jumped off, at least finish this storyline. It’s only issue 4 after all. And next month, we get the introduction of another Wildcat into the DCU as we get Spartan! As if I needed more reasons to love this book!