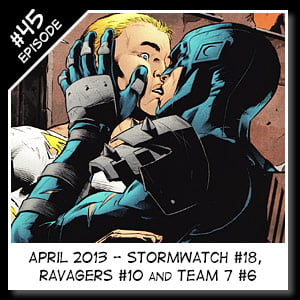 Show Notes: Welcome to another episode of Wildstorm Addiction! Our resident Wildstorm experts Joe David Soliz & Benjamin Murphy review Stormwatch #18, Ravagers #10, and Team 7 #6, as well as some other Wildstorm appearances in the new DCU 52.

00:00:00  – Ben welcomes everyone to episode #45 and gives his spoiler alerts warning. Remember, all written reviews on the website are spoiler free and usually get posted within a day of print release. This month on our “Friends of Wildstorm” series, where we bring on a lifelong or recently converted fans of the Wildstorm Universe we have Jill Johansen a.k.a. Raye from Clark’s Bar. Jill is one of the regular’s at Clark’s Bar and is one who gets some great in depth discussions going on at the boards. She’s also really good at keeping up with posting news and she is an avid Apollo and Midnighter fan. Jill, gives us a quick background on why and when you started following Wildstorm.

00:02:08  – Ben continues with plenty of Wildstorm related news as it pertains to the current books in the DCU.

00:08:00 – Our guest and friend of the show, Jill Johansen, starts it off with the review of Stormwatch #18. Released on 3/06, written by Peter Milligan with art by Will Conrad and cover by Ken Lashley and Matt Yackey.

00:51:55 – Joe gives an update on other Wildstorm related sighting and tie-ins from the other DCU 52 issue #18’s that have released this month.

00:56:53 – Joe continues by giving a run-down on the upcoming books and character appearances  in the new DCU relaunch. Remember, all these books are available digitally the same day as the print release at the DC section of www.comixology.com

00:58:42 – Ben gives some quick shout out’s starting with Chris Striker’s The Higher Authority’s message boards Clark’s Bar to continue the Wildstorm integration discussions amongst long time Wildstorm fans at http://theauthority.ws.  Also check out our friends of the show, the Image Addiction podcast as they cover new releases from Image Comics and The Savage FINcast as they cover The Savage Dragon. Both can be found at http://www.imageaddiciton.net And get twice the Valiant coverage now with our friends of the show from the Only the Valiant podcast at http://www.onlythevaliant.com and our friends over at www.culturalwormhole.com and their Valiant Future podcast. Joe guest-hosted Ep. 4 last month and will be on the upcoming Ep. 5 as well.

01:01:03 – Ben continues with the contact details as shown below.The opening music is “Universal Domain” by Dreamline which can be found at http://www.musicalley.com.

Contact info:
Jill Johansen (Guest Host): www.kentauroi.com where you can check out her artwork and her upcoming webcomic.
Joe: http://twitter.com/joedavidsoliz (I have changed my Twitter)
Wildstorm Addiction: http://twitter.com/wildstormaddict
Post your comments for each episode on the wildstormaddiction.com!
Email us at wildstormaddiction@gmail.com.
Facebook Fan Page: Wildstorm Addiction Podcast Fan Page
Our show is now on Stitcher! Listen to us on your iPhone, Android Phone, Kindle Fire and other devices with Stitcher. Stitcher is Smart Radio for Your phone or tablet. Find it in your app store or at stitcher.com The latest episode is always available for you- no syncing needed… and no memory or storage wasted! Stitcher SmartRadio- The Smarter Way to listen to radio.

Joe will be at Pax East in Boston, Massachusetts March 22-24 helping to promote his friend’s upcoming video game Mech Knight Chronicles which is frm Dinosaur Games. They can be found at www.dinosaurentertainment.com.