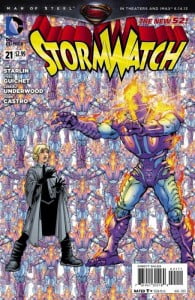 Stormwatch has been through a lot of changes lately, but it doesn’t seem that the changes are helping the title as intended.  What began as a potential for an interesting new start for the team, is quickly devolving into traditional superhero fare.  I fear the title may not survive past Villains Month in Sept.

This title does not feel like Stormwatch anymore.  I thought the space story could be interesting but I can’t help feeling like I’m reading an old Guardians of the Galaxy from the 80’s.  I’ve never liked this old style-writing and story-telling.  It was fine for the time but I think modern comics have us spoiled now in that respect.

The story just seems so basic.  I have yet to find anything about the story that excites me.  I feel like they included Lobo simply to keep him in use.  And the new bad guys called The Kollective explain why they chose Lobo as their herald and I just don’t buy it.  I just feel like we’re going beat per beat in this story with no surprises or twists.

The art is not horrible but it’s way too simple for me.  Again, another aspect that makes it feel as if this book is stuck in the 80’s.  Stormwatch was born in the 90’s and the original incarnation of the team represented that for better or worse.  When the 90’s came to an end and we entered the 2000’s the team changed again and matched the time.  Even the first incarnation with the New 52 seemed to fit more in this universe than this team feels right now.

Unless something drastic happens, we may be on the verge of losing our last Wildstorm title.  There’s no Stormwatch book listed for Villains Month so already that’s not a good sign.  So we may be coming back in Sept. to discuss the end of the book is how it looks right now unless a miracle happens.