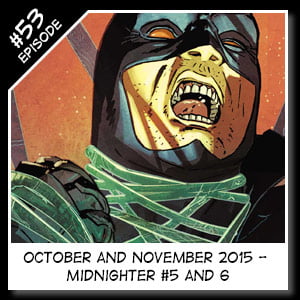 00:00:01  – Ben welcomes everyone to episode #53 and gives the obligatory spoiler alerts warning for the issue being reviewed.

00:00:35  – Ben continues with some quotes from one panel that Steve Orlando was on at the NYCC New York Comic Con. No listener mail this month.

00:18:03 – Joe gives a run-down on the upcoming books and character appearances in the new DCU June 2015 relaunch. Remember, all these books are available digitally the same day as the print release at the DC section of www.comixology.com

00:24:50 – Joe gives some quick shout out’s to the new Facebook version of the Clark’s Bar: https://www.facebook.com/groups/1036575389702716/, now with 15 members! We also want to mention our friends over at http://culturalwormhole.blogspot.com/ and their Valiant Future podcast where Joe has been a regular co-host for over a year now.

00:27:34 – Ben finishes up with the contact details as shown below.The opening music is “Universal Domain” by Dreamline.
Contact info:
Joe: http://twitter.com/joedavidsoliz
Wildstorm Addiction: http://twitter.com/wildstormaddict
Post your comments for each episode on the wildstormaddiction.com!
Email us: wildstormaddiction@gmail.com (Reinstated, bring on some new listener mail!).
Facebook Fan Page: Wildstorm Addiction Podcast Fan Page
Our show is now on Stitcher! Listen to us on your iPhone, Android Phone, Kindle Fire and other devices with Stitcher. Stitcher is Smart Radio for Your phone or tablet. Find it in your app store or at stitcher.com The latest episode is always available for you- no syncing needed… and no memory or storage wasted! Stitcher SmartRadio- The Smarter Way to listen to radio.