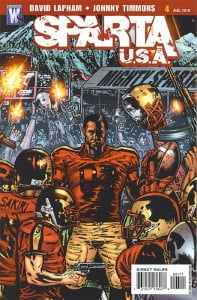 Blue-skinned Nazi’s versus Red-skinned Americans (well, ONE red-skinned American). This is the weird turn this series has taken. What still has me frustrated about this series is that we’re almost done and I’m afraid two issues isn’t going to be enough to wrap up everything that’s been laid out here. Does it have to be? No, but I’d hope for some sort of closure before the end.

Although, I will say Timmons topped his scene from issue 2 of lead character Godfrey standing in the middle of the football stadium, sword drawn with a bonfire in the background. This time Godfrey rides into the stadium on a horse with his sword drawn; followed by his female commandos (which double as his harem).

There’s a subplot about Ralphie’s sister wanting a baby that I’m not sure how it fits into the grand scheme of things yet. I’m also a little disappointed that while it’s been established magic is part of this world, we’ve seen very little use of it. This title may be appealing to some but I’ve given it more than a fair shot and I can honestly say it doesn’t appeal to me.