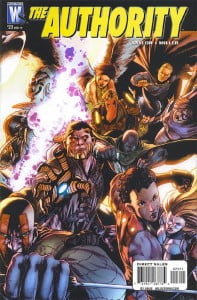 The Authority…in space! That’s what I’m enjoying the most about this title. With access to The Bleed, The Authority are no strangers to dealing with other-worldly creatures. But with the current arc, it gives the new setting of outer space to do this.

I’m a big sci-fi fan so as I’ve read this Authority title month after month since The Carrier blasted off into space, I can’t help but have memories of Star Wars, Star Trek, Babylon 5, and Battlestar Galactica dance through my head as I read. Outer space is such a versatile playground for storytelling and it’s utilizing The Authority in ways they’ve never been used before.

This issue is a little more subdued than the previous one. But that’s ok because we were coming off a great cliffhanger. So even though last issue was writer Tom Taylor’s first, I think this is where he’s really getting to set up what he’s going to deal with during his run. One thing I appreciate about Taylor’s writing is his insertion of humor. There’s a great moment at the beginning between Grifter, Flint, The Engineer, and Swift. 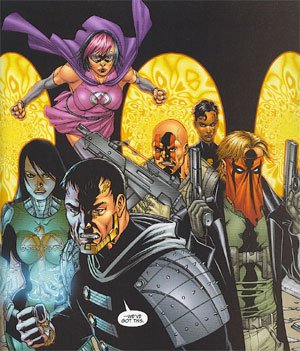 Even though he can do good humor, Taylor is also good at giving the story scope. The Carrier as a ship is massive in its own right. But there are two times in this issue that we see that out here in space, The Carrier seems real small real quick. Add that to the fact that Taylor introduces TWO threats for the heroes in this issue and you’ve got a great set-up for conflict.

Mike Miller’s art is still excellent. I’m torn about this being his last issue because I love his art but I also love Al Barrionuevo’s art who is scheduled to return to the book with the next issue. I hope Mr. Miller returns to the Wildstorm Universe eventually with another book.

Much like Wildcats, The Authority has proved to be a solid book each month since the new stories began in January. Other than some creative team changes, I’ve had no qualms with this book whatsoever. If you like your superheroes with a dash of sci-fi, this book is the place to be right now.