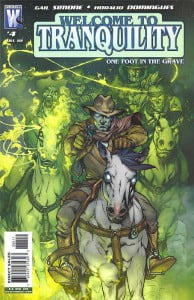 “Homecoming-Part 4: Home to Roost” (No Spoilers)

Simone’s normally quaint little town of Tranquility gets a little ‘Silence of the Lambs’ injected into it this issue. As the superhero citizens of the town learn the identity of the villain that’s been on the attack things get a little tense.

Simone has introduced a great new villain during this series. He has proven himself to be a true threat even to the more powerful residents of Tranquility. His motivations also take a darker tone this issue as Sheriff Lindo reveals a past connection she has with the villain.

We do get some great action pieces in this issue, especially from some of the characters that you normally wouldn’t expect it from. It’s this sense of the situation truly becoming dire that has kicked this story up a notch. One character’s future is already in question and it seems that anyone who encounters this villain isn’t fairing any better. 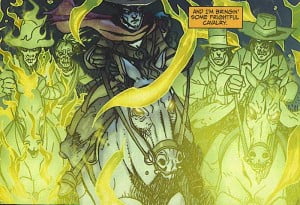 Domingues’ art does have its moments. He gets to draw some great action this issue. There’s also the arrival of a hero who I think will mean more to people who read the first Tranquility series. It was great to see him in action again.

Simone also does a great juxtaposition of the events towards the end which (without spoiling anything) involved the villain taking on the returning hero while a little girl reads a comic book with Pink Bunny. It’s a very cool moment and I thought Simone did a great job with it.

I have to hold my rating steady for this one. This has been a great little mini-series so far and I know with two issues left we’ve still got room for a lot more Gail Simone goodness!