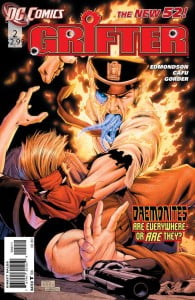 Grifter continues his debut in the DCU in this fast-paced issue that was over a little too quickly for my tastes but had some great action in it.

This comic is reading a lot like a T.V. show to me. There’s a sense that they’re really going for a real world feel here but of course we’re getting supernatural elements thrown in as well. I like the opening scene in the diner but when I found myself getting to the end of the issue I felt maybe it could’ve been shortened a bit. But I guess that’s because I’m so anxious to see more about this character I really don’t want the issue to end period.

One thing I think Edmondson is nailing is the fact that Grifter is a trained ex-soldier. I love the fighting style that CAFU draws for Grifter. It’s very in-your-face and brutal (see a panel where Grifter steals a police car for a good example). But it’s very much in line with the character Edmondson is setting up here. It’s clear this is not the Grifter we knew in the Wildstorm Universe. I hate to admit it but this Grifter may shape up to be more bad-ass that the WSU version. However, only time will tell with that one.

The WSU fanboy in me would love to see Zealot introduced in this title as Grifter’s love interest. But the character we do have here, Gretchen the con-woman, is not a bad choice to start off with. So far she’s interesting enough that I want to know more about her, especially when you see the destination she picks when boarding a train in this issue. Color me intrigued!

Finally, we get a great meeting between Grifter and his brother Max Cash. It’s good to see Max in the pages of comics again. I love the exchange they have at the end of the issue and look forward to more scenes with these two.

Overall, a good issue, but I didn’t think it was a great issue. It seems to be setting up a lot so I’m really anticipating the payoff here. But ultimately, isn’t that what a good creative wants is to make you want to come back and read more?