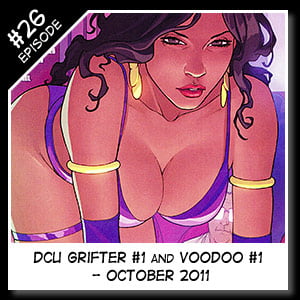 00:01:36 – Joe reviews the introduction of the DCU version of his favorite Wildstorm character of all time, Grifter #1. Released on 9/14, written by Nathan Edmondson, with art and cover by CAFU.

00:12:53 – Ben gives his opinion on the first issue of Grifter in the DCU. Let’s just say he and Joe will have a lot to discuss.

00:14:52 – Joe follows up on the disappointment that Ben feels in this first issue and he defends the choices that Edmondson made with Grifter’s character, because both he and Voodoo are completely new re-imagined characters in the DCU.

00:16:56 – Ben completes his mixed feelings on this first issue, but is excited to see where Nathan continues to takes this character in the new universe. He also makes a terrible Southwest airlines joke.

00:20:36 – Ben reviews the introduction of the Wildstorm character Voodoo into the DCU universe. Released on 9/28, written by Ron Marz with art and cover by Sami Basri. Black Razor’s logo on lighter. Black Ops “Shire” (Svetlana Grozny) character tie-ins. Does this mean that I.O. is a real agency in the DCU universe? Discussion about the “sexiness” and other backlash from this issue (link). Ben thinks this review will only take 3 seconds, but it sadly goes on and on for about 7 minutes.

00:26:51 – Joe tries to bring an intelligent assessment on the new Voodoo book.

00:33:07 – Ben gives an update on other Wildstorm related sighting and tie-ins from the other DCU 52 issue #1’s that have released earlier this month.

00:41:30 -Joe gives an update on the Wildstorm related books and character appearances in the new DCU relaunch. Remember, all these books are available digitally the same day as the print release at the DC section of www.comixology.com

00:42:47 – Joe gives a shoot out to Chris Striker, of the Higher Authority website. He’s finally launched the new Stormwatch.ws website so go check it out! He also gives a shout out to Franky de Jesus over at the Eye of the Storm Podcast who did his own review of the first issue of Stormwatch #1 in the new DCU. Joe also gives it up to some of the guys who helped us launch this podcast from the old Comic Addiction banner. Allison, Chris Partin, and Paul Steven Brown have launched a new podcast covering the new DCU 52 with DC Wormhole. They are currently two episodes in, so check them out at the Cultural Wormhole.