Now I can tell Paul Cornell’s starting to have fun with this title.  The opening page of this book alone is the most epic tongue-in-cheek moment I’ve ever seen!  I also like the dysfunction between the team members.  I know Cornell mentioned in interviews that we’ll be seeing the team falling apart.  When you see how they treat each other it’s a wonder they ever came together in the first place. 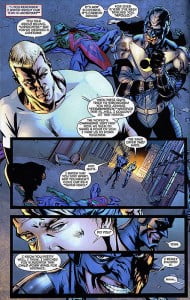 Cornell also does good to answer some of the fanboy rants about the encounter with Martian Manhunter and Midnighter last issue.  The great thing is, I think Cornell anticipated the reaction and quickly answers the issue that angered so many fans last issue.

The humor in this book is also very clever.  There’s a bit with the Justice League that had me laughing out loud.  It was a clever bit that also involved a clearer understanding and cooler use of The Projectionists powers in my opinion.  I like that amidst all the chaos, there’s still room for some laughs.  It is a very fast-paced book and there is so much going on here.  This issue is definitely still setting up some factors of the story but we did get some forward movement. 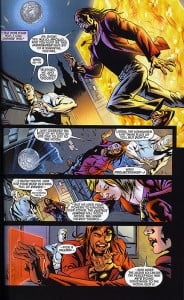 I loved the combination of Miguel Sepulveda and Al Barrionuevo doing the art.  It’s good to see Barrionuevo drawing Wildstorm characters again.  I think the different colorist for this issue brought out their art more.  There are some amazing shots in here and again the effects used to enhance the art are very impressive.

I enjoyed the issue but I am really curious to see what happens next.  I can’t necessarily say that it’s written for trade.  I think it’s more that Cornell is just doing his best to fit this epic opening story in the pages allotted to him.  I am really enjoying this new incarnation of Stormwatch!