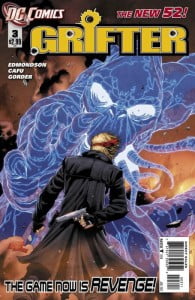 Nathan Edmondson and CAFU take us into the third month of the New DCU 52 with the DCU’s most wanted man, Grifter, still on the run. Although still a solid title, I was hoping for a little more revelation in this issue but the awesome fight at the end did make up for a little bit. 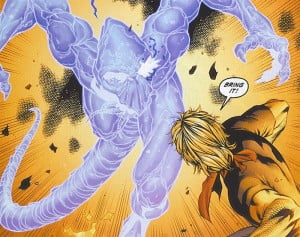 I have successfully thrown out all I know about the Wildstorm version of Grifter. I think for fans of the old Grifter, you have to do that to appreciate the fact that Edmondson is rebuilding this character from the ground up. There are familiar trademarks there: the mask, the guns, the Daemonites. But the set-up and the motivation for the character are all brand new. So what I’m finding with this title is I’m anxious to know more but so far we’re getting teases and set-up. Now, I’m not against any of that but I was hoping to know a little bit more by issue three than I do after reading it.

In a conversation with his brother, Grifter does drop some hints as to the truth behind some of what’s going on. But overall, the character is still a mystery. If Edmondson’s goal is to leave me wanting more, he is definitely achieving that each issue. Assuming this story arc will be 5-6 issues long, I hope we know a lot more about Grifter by issue six. 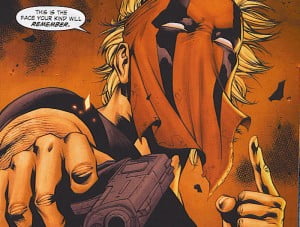 One thing that title is delivering on without fail is great art and awesome action. CAFU draws an incredible version of Grifter and he finally gets to draw the Daemonites in their entirety this issue as well. Grifter also utters a line towards the end of the battle that made me smile. I also am curious to know more about Grifter’s love interest, Gretchen. I’m not sure why, but she is very intriguing to me. Finally, there is something that happens to Grifter’s brother by issues end that I feel is a great set-up if I’m right as to what Edmondson appears to be doing with the character.

I am still enjoying the series, but I am hungry for more. I know Grifter can kick-ass and I hope we get plenty of that next issue. The solicit for #4 shows us that he’s going to face Green Arrow next. I understand crossovers are good because it allows readers to crossover but I want more time with Grifter too!