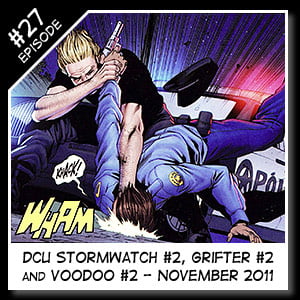 Show Notes:
Welcome to another episode of Wildstorm Addiction! Our resident Wildstorm experts Joe David Soliz & Benjamin Murphy review the new DCU versions of Stormwatch #2, Voodoo #2 and Grifter #2. This is our first regular month episode with the inclusion of all of the titles we normally cover from the Wildstorm Universe in the new DCU. As well as any other appearances by other Wildstorm characters in the new DCU titles.

00:00:33  – Joe welcomes everyone to episode #27 and gives his spoiler alerts warning. Remember, all written reviews on the website are spoiler free and usually get posted within a day of print release.

00:01:14 – Joe kicks it off first with a review of Stormwatch #2. Released on 10/5, written by Paul Cornell with art and cover by Miguel Sepulveda and Al Barrionuevo. Joe informs us that this cover was not the original cover when first solicited. However this cover is an homage to the Brave and Bold #28 and The Authority Vol.1 #10. 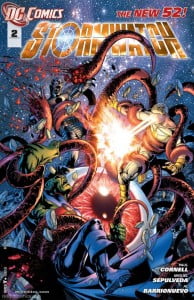 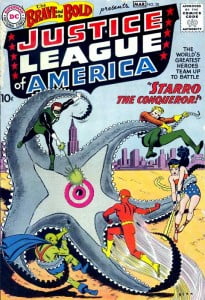 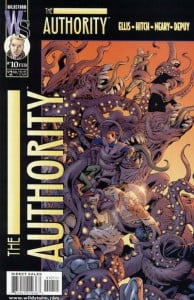 00:11:24 – Ben gives his opinion on the second issue for the smash hit DCU version of Stormwatch. He just can’t wait for this title each and every month!

00:12:13 – Joe wraps up the Stormwatch review by agreeing with Ben on how fun this book is to read.

00:13:56 – Ben reviews the second issue of the new incarnation of Voodoo in the DCU. Released on 10/26, written by Ron Marz with art by Sami Basri and cover by John Tyler Christopher… not Sami Basri (as the solicits indicate). Ben tries to put aside his disappointment in the first issue and finds that he didn’t want this issue to stop.

00:22:13 – Joe gives his assessment on the second issue of Ron Marz’s take on Voodoo. Joe seems impressed with what Ron Marz has been doing on this book and hopes that people give it a second chance after that first issue.

00:28:12 – Joe reviews his favorite character in Grifter #2, released on 10/12 and written by Nathan Edmondson, with art and cover by CAFU. Another issue that flew by and you wish just didn’t end. Joe gives Edmondson high praise for the realistic nature to which he is writing his favorite comicbook character.

00:36:55 – Ben gives his opinion of Grifter #2, same with Voodoo #2 he is glad with the turn around since issue #1. CAFU nails the action scenes in this issue, fan-freaking-tastic! He’s really looking forward to the pay-off that is being setup from these first two issues.

00:38:30 – Ben gives an update on other Wildstorm related sighting and tie-ins from the other DCU 52 issue #2’s that have released earlier this month.

00:42:24 -Joe gives a run-down on the upcoming books and character appearances in the new DCU relaunch. Remember, all these books are available digitally the same day as the print release at the DC section of www.comixology.com

00:43:12 – Joe gives a shout out to Chris Striker, of the Higher Authority and Stormwatch.ws websites. Remember to visit The Higher Authority’s message boards Clark’s Bar to continue the Wildstorm integration discussions amongst long time Wildstorm fans at theauthority.ws. DC Wormhole podcast ep. 3 is out at culturalwormhole.com and they’re covering several of the new 52 books.

00:44:20 – And big news, Joe mentions that he will share a booth at Wizard World Austin on November 11-13. So if you live in Texas go see him, he’d love to hear from a listener in person!