I just got back from Wizard World-Austin this past weekend. This is the second year this con has come to the Texas capitol. Last year felt like more of a test run to see if the con would be successful. But this year you could tell they increased it substantially. It seemed like there were more guests and the crowds seemed to be bigger too. 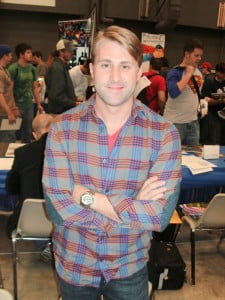 I got to sit down and do a follow-up interview with Grifter writer Nathan Edmondson. The audio will be available as part of our next podcast but I figured I’d tease you with a couple of tidbits Nathan shared. (Note: Some of these things are confirmed by the DC solicits in February).

First off, the Daemonites will not only play a big role in Grifter’s title, but will begin to play a bigger role in the DCU as well. There will be more crossovers and this will include Voodoo and Stormwatch too. Grifter will be traveling across the globe in the next few issues. Edmondson had just finished issue #7 and when asked if we can expect at least a 12 issue run from him, he said he’s got the book plotted beyond that and as far as he knows, there are no plans to take him off the book any time soon.

Artist CAFU has left the book and veteran Wildstorm artist Scott Clark takes over with issue #4. Edmondson expressed his excitement about working with Clark not only because he’s a veteran of the industry, but he also knows these characters and looks forward to Clark’s interpretation of this new version of Grifter. 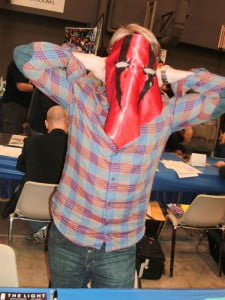 As a bit of side note, Edmondson had previously tweeted that if someone brought him a Grifter mask, he would gladly wear it. Well, I answered his call and had my brother make me a mask which I took to Nathan. He was very excited about the gift.

Our podcast also shared an artist table with local artist (and good friend) Roy Gonzales. We had a great poster designed by our very own Ben Murphy. We also had some updated business cards and some free comics to give away. There were a couple of people who came by and who still didn’t know that the Wildstorm characters had been folded into the DCU if you can believe it. It’s a good thing we were there to educate them! Overall, it was an awesome convention and we look forward to being back next year. Until then, enjoy some of the pictures we took. 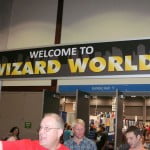 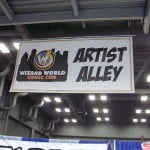 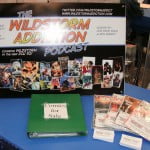 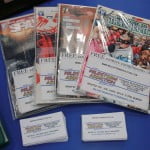 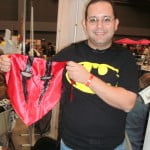 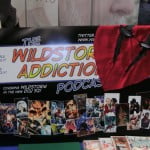