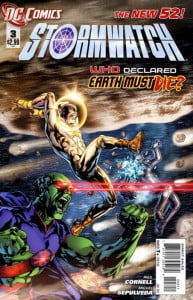 THIS was the issue of Stormwatch I knew Cornell was building up to. There are some amazing concepts and some incredible action in this issue. If there are some people out there who follow the “I’ll get the first 3 issues and see where it goes” method, I hope that this issue has solidified Stormwatch as part of your monthly buys! 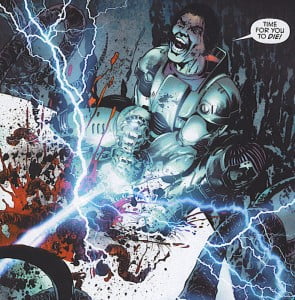 First off, Cornell takes Jack Hawksmoor, one of the most unique characters to come out of the Wildstorm Universe, and gives a great new twist on his powers. I don’t want to spoil it but let’s just say two of the DCU’s most famous cities are involved in a cool little visual on page 2. We also get to see Apollo really show off his powers and how strong he really is. It definitely made for one the best action pieces in the issue.

Most of the new characters grow more interesting with each issue but Harry Tanner the Eminence of Blades is shaping up to be the most interesting by far. His motives are still not entirely known but his self-centered decisions are really making for some intriguing story-telling. The end of the issue also has a great action scene where most of the team gets to participate and it leads to great cliffhanger involving Midnighter. 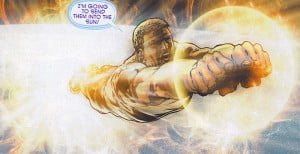 I also have to say Miguel Sepulveda’s art is growing on me. I wasn’t sure what I thought about it the first couple of issues but here I think he is really settling in well to the title. I assume he also got to plan out the scene I mentioned earlier on page 2 so I really appreciate the designs he went with. He also gets to illustrate a very creepy final page. I’m looking forward to more from him.

Overall, this was a spectacular issue. I think Stormwatch is proving without a doubt that they have a very significant place in the DCU. Cornell is delivering on all aspects with this title and its obvious him and Sepulveda are collaborating well. If you’re still hesitant about this title, I hope this issue sells if for you.