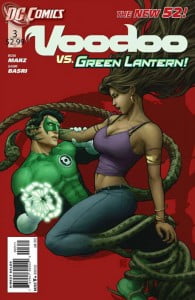 Voodoo encounters her first major DCU character in this issue as Green Lantern Kyle Rayner comes into the mix. I was a little leery of Green Lantern showing up in this book but I like the explanation as to why he shows up. 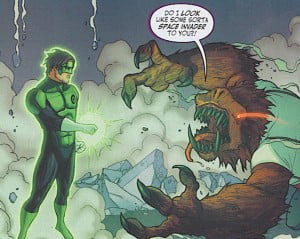 I’m going to start this time by focusing on Sami Basri’s art. I’ve mentioned that I’ve really loved it so far but it was the little things in this issue that made me appreciate it more. I love Voodoo’s facial expressions here especially in the beginning of the book. Basri is really taking time to match the mood of what’s going on in the panel versus what we see in each of the characters and their expressions. This is especially evident at the end where Green Lantern and Voodoo share a look as he’s forced to make an interesting choice.

We get a little more insight into Voodoo’s role on Earth and even get an explanation for her new shape-shifting ability. Some of the other characters that show up also shed some light on how Voodoo, being an alien/human hybrid, differs from whoever her masters are. It’s interesting because the February solicits have already shown us that the Daemonites (currently featured in Grifter’s book) will be crossing over with Stormwatch and Voodoo. The seeds of this are planted at the end of this issue with a nice cliffhanger. 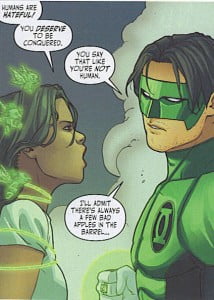 You can tell Marz had fun including Kyle Rayner in the story. We get a fun fight when he shows up and since this is Marz’s creation, this is the most pure incarnation of the character you’ll get. Ultimately, his appearance will probably boil down to a cameo when all is said and done but again, I did like the reason he showed up in the book.

Unfortunately as I write this review, the news has already broken that Marz will be off the title after next month’s issue 4. I’m sad to see him leave so soon as he really seemed eager to work on the project and has done some great work in these premiere issues. I look forward to his last issue next month and hope that his departure will not cause people to leave this book because I’m really enjoying it.