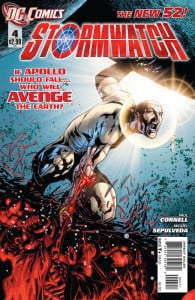 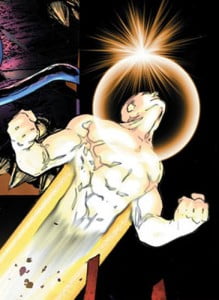 After an amazing last issue, the action continues this month as the Stormwatch team wraps up their first big mission. Midnighter and Apollo fans should enjoy this issue a lot as the two get to shine and even share some good moments together. It’s the definitely cool to see these two in action together again.

I think Sepulveda’s art has gotten stronger with each issue. I’ve noticed small improvements as we’ve gone along. I think he did a better job with the facial expressions here and there were some epic shots that he composed like Apollo’s arrival at the battle and towards the end where Jack executes a plan to subdue the giant monster. 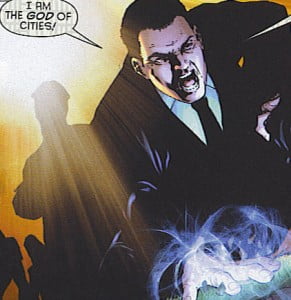 If there’s any complaint about this comic is that is may be a little too fast paced. It has truly been an amazing ride but man does it go by fast. But I guess that’s a positive because it just means we don’t want it to end. But the set-up for the next issue may leave it open for more character moments but we’ll have to wait and see.

I’m enjoying this comic but because it’s over so fast it’s been difficult to write spoiler-free reviews. This was just a short 4 part story and the news recently broke that Paul Cornell is leaving after issue 6. It’s sad to see that so many of the writers that launched these New DCU 52 titles are leaving so soon. I was hoping for at least a year’s worth of stories but you never know what goes on behind closed doors. But I am looking forward to more adventures of this Stormwatch team in the DCU.