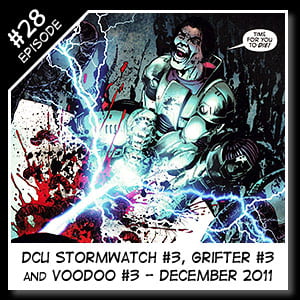 00:00:34  – Ben welcomes everyone to episode #28 and gives his spoiler alerts warning. Remember, all written reviews on the website are spoiler free and usually get posted within a day of print release.

00:01:20  – Ben gives some Wildstorm related news as it pertains to the current books in the DCU. February 2012 we will see the first crossover of the 3 Wildstorm titles as the Daemonites begin to play a bigger role in the DCU. And sadly Ron Marz is off of the Voodoo title after issue #4 and is being replaced by writer Josh Williamson. Apparently, Marz turned in a script for #5 (as shown in solicits) but it was rejected and Williamson’s script will be used instead.

00:03:01 – Joe kicks it off first with a follow-up interview with Nathan Edmondson at Wizard World Austin. We get to hear some upcoming highlights for Grifter and his dealings inside the DCU.

00:14:59 – Joe reviews Stormwatch #3. Released on 11/2, written by Paul Cornell with art by Miguel Sepulveda and Al Barrionuevo. Joe starts referring to this as the hidden cover which was not the original cover when first solicited like last months. This month Chris Burnham was the artist for the printed cover. He gives this issue a resounding score of 10 and then explains why he gave it such an incredible rating.

00:25:06 – Ben reviews Grifter #3. Released on 11/09 and written by Nathan Edmondson, with art and cover by CAFU, sadly his last issue on this title as Scott Clark and Dave Beaty will be taking over for issue #4 next month.

00:33:57 – Joe gives his assessment on Grifter by quoting his favorite line, “This is the face your kind will remember!” He’s pretty bumbed out that CAFU will be leaving the title so soon and thinks that this is not the last time we shall see Max Cash as he himself may now be possessed by a Daemonite!

00:38:19 – Joe reviews the third issue of the alien Voodoo. Released on 11/23, written by Ron Marz with art by Sami Basri and Hendry Prasetya, along with a cover by John Tyler Christopher. This is the first major character cross-over between an old Wildstorm character and a lead DCU character of Green Lantern. Joe is still totally digging Basri’s art with the detail and emotion in each and every character’s facial expressions.

00:46:54 – Ben is also pretty disappointed that Ron Marz is leaving this title so soon. Even though it was an awkward start at first, he’s really getting into this title and can’t believe it’s changing hands so quickly.

00:49:43 – Ben gives an update on other Wildstorm related sighting and tie-ins from the other DCU 52 issue #3’s that have released last month. (I know I say October twice, these released in November!)

00:53:26 -Ben continues by giving a run-down on the upcoming books and character appearances in the new DCU relaunch. Remember, all these books are available digitally the same day as the print release at the DC section of www.comixology.com

00:55:49 – Joe gives a shout out to Chris Striker, of the Higher Authority and Stormwatch.ws websites. Remember to visit The Higher Authority’s message boards Clark’s Bar to continue the Wildstorm integration discussions amongst long time Wildstorm fans at theauthority.ws. DC Wormhole podcast ep. 3 is out at culturalwormhole.com and they’re covering several of the new 52 books.