Wow! Paul Jenkins did not waste any of his talent on this short two-issue run. It was obvious he not only set out to tell a good story, but I dare say he did a better job of it in two issues than previous writer Paul Cornell did in the previous six. I’m not trying to put down what Cornell did on the title but Jenkins did an outstanding job with what he had to work with. 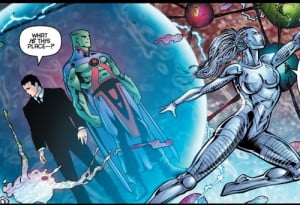 In interviews before he took over the title, Jenkins expressed interest in staying on the title past his two-issue run. Now we do have writer Peter Milligan coming onto the title next month and I look forward to what he has in store as well, but man do I wish Jenkins had more time on this title! I think the main thing I enjoyed about his story is that he seemed to get the characters. It’s hard to read about these characters and not think about The Authority since basically it’s the same characters with the addition of Maritan Manhunter. But I think this is a good mixture of that and Warren Ellis’ early Stormwatch work. We see some characters here taken in some pretty interesting directions. You’ll see what I mean when you see how the issue ends with the Midnighter and Jenny Quantum. The two get into a situation where some grey area between good and evil arises and it’s that kind of conflict that always made Stormwatch/The Authority work so well in the past. 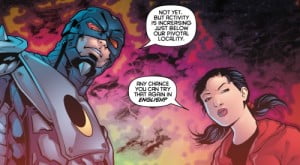 Another person I’m sad to see go so soon is artist Ignacio Calero. He had some help from Daniel HDR in this issue but their styles seem similar so I couldn’t really pick out when the art changed. But that’s a good thing because sometimes a drastic artist change in the middle of a book can throw off the reader. Where Jenkins seems to get these characters story-wise, Calero definitely captures them visually. None of the characters were off and felt like themselves. I especially loved the way he drew Midnighter will all the extra gear on him. As much as I miss his old costume, having a good artist draw this version makes it easier to take.

I can’t stress enough how much I enjoyed Paul Jenkins on this title. I know he’s moving on to other things but I hope the sales on these issues are strong enough that when Peter Milligan finishes his upcoming run, Jenkins will be the first on their list. He made sure that this title continues to be one of the fresher and more original titles in the New 52 and I hope people are starting to drop other books will give this a try if they haven’t already.