The new creative team of Rob Liefeld with Frank Tieri as co-plotters finally makes their debut this month but unfortunately a lot of the concerns fans had about this creative team are present in this issue. This mixed in with surprisingly weak art by the normally solid Scott Clark do not make for a good beginning on this run. 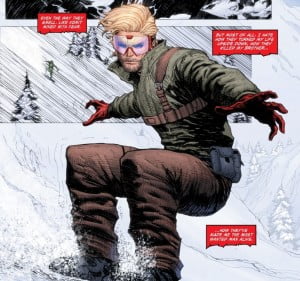 Those who know me know that next to Batman, Grifter is my favorite character. I’ve also been accused of the being the cheerleader for all things Wildstorm-related and some have discounted my reviews because they think me biased. I’ll admit that I do love the Wildstorm characters and for the most part I am pretty lenient when it comes to their stories. But I have to say I was not happy with this issue of Grifter. I am a very positive person and don’t like focusing on negatives so I’ll get through them quick and then talk about what I did like about the issue. 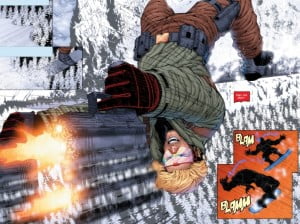 One struggle fans have had with the Wildstorm characters being introduced into the New 52 is the “old vs. new” argument. Many of the Wildstorm characters in the New 52 are vastly different from the originals. This has turned off some but for me it has been interesting. I never expected, nor really wanted, a direct translation of the old WSU into the DCU. A lot of these characters in their old incarnation wouldn’t fit in the DCU. The DCU Grifter has been one that has been chased, beaten, and finally had his loved ones take away. In issue 8 the DCU Grifter seemed practically on the verge of suicide because all of this had transpired and it was very appropriate based on what he had experienced. The Grifter in this issue, however, talks and acts like the WSU Grifter. You’d think I’d be happy with that fact but for me it kills everything that’s been setup about the character so far. The WSU Grifter varied depending on who wrote him. Some wrote him more serious while others a tad bit goofy. I never liked the latter. Grifter’s not meant to be a wisecracker, especially not the DCU Grifter. Even though he mentions the loss of his brother, I don’t see the hurt he was dealing with last issue. To me, this is a step backwards for the character. 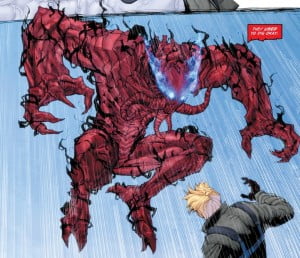 Also, it is good to have artist Scott Clark back but for the first time since he’s been on the series, I felt his art seemed a bit rushed in some areas. He had the previous month off so I was kind of disappointed to see this. I’ve always like Clark’s art and the fact he’s from the old Wildstorm crew adds a bit of nostalgia to the title for me. I hope this was just a temporary thing because this title needs a lot of help right now.

It was also hard to get into the story and dialogue. The story of Grifter being the Chosen One to fight against the Daemonite is a storyline that has been used countless times and just didn’t seem to fit here. Grifter was definitely setup by the Daemonites as was revealed last issue but I don’t buy this new development. Grifter was fine just being a thorn in the Daemonites side.

Finally, I will say (no spoilers because he’s on the cover) that seeing Deathblow introduced into the DCU was a nice treat. Deathblow was one of my favorite Wildstorm characters and it’s going to be fun seeing him and Grifter in a book together again. I also like the design for Cheshire. I’d never read about her in the old DCU but since we’re not getting Zealot (apparently she’s going to appear in Deathstroke), it’s cool that we’re going to have at least one ass-kicking female in this title for now.

This title was already on life-support and it really needs something unique to get people to try it. It’s frustrating as a fan because I love this character so much but it’s so hard to get people to read a book I myself am starting not to enjoy. But I am loyal and I will follow Grifter to the bitter end but I hope Leifeld and Tieri have something big up their sleeves because this title needs serious help.