You know how a series sometimes begins by describing itself as “first explosive issue!” Well, Ravagers is a classic example of a comic that actual lives up to this declaration. Writer Howard Mackie and artist Ian Churchill present an amazing issue that literally explodes from the pages of The Culling crossover which just wrapped up. Being the only title in the New 52 with a name never used before, Ravagers makes its mark and proves why it’s worth of being part of DC’s second wave of titles. 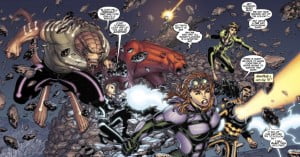 If you did not follow The Culling crossover which ran through Teen Titans Annual #1 and continued through the #9 issues of Superboy, Legion Lost, and Teen Titans, you’re missing out. Most people this month were following Batman’s Night of the Owls crossover (and yes it was an amazing crossover). But I kind of wish they had done this one separately so it wouldn’t fall under people’s radar. If you didn’t read The Culling you might be a little lost but I think Mackie wrote it in such a way that even if you’re reading issue one for the first time, I think you still get this gist of what happened. But that sense of being lost actually works to the advantage of the story as our characters are trying to find their way as well.

There’s no doubt that Mackie and Churchill convey the sense of urgency as the kids scramble to figure out what to do now that they’ve escaped N.O.W.H.E.R.E.’s facility. Mackie keeps the situation real as we see some characters not survive the first issue while others don’t immediately join up and form a group. This kind of realism keeps the comic interesting because things don’t conveniently fall into place for the group. This helps keep the threat level up gives a real sense of danger for the characters.

Churhill’s art is incredible in this issue. Of course, I’m most excited to see Fairchild as part of this title since Gen 13 was one of my favorite books in the old Wildstorm U. Since she’s been in the New 52, I think only Brett Booth drew my favorite rendition of her. But Churchill gives Booth some major competition as he renders an awesome version of Fairchild. I even love his attention to detail as we see her costume sag when she’s not using her powers and then become form-fitted when she does use her powers. It’s this attention to detail that takes a book from good to great. 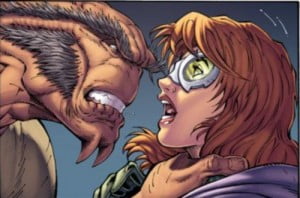 I could not be happier with this book. When it was first announced I was skeptical because, first off, I was hoping for a Gen 13, but secondly I had no idea what the title ‘Ravagers’ meant. But since coming through The Culling crossover and seeing how it all came together I’m really happy how it turned out. I hope everyone who’s curious about the second wave books will give this one a try. You will not be disappointed!